Eastern is getting closer and in the area where I live people are already baking the traditional Eastern pies and cakes.
As I already told you last year with Torta coi becchi, the chocolate and rice pie, here the true heros of Eastern desserts are pies, especially with rice.

This year I speak about torta di riso massese, a dessert that despite its name it’s not a proper pie or cake, since it’s more similar to a big crème caramel with a rice base. As the name suggests it’s traditionally prepared in the area around Massa and Carrara, which both claim the paternity of this dessert.
During the ten years I have been living in this area I ate many versions of torta di riso, also because even if it is an Eastern recipe, it is prepared all year long.
Every family has its own recipe which could vary in the proportions of milk and eggs, the quantity of rice, the thickness of the custard and the true secret ingredient: the mix of spirits used to give flavour, usually a big part of anise liqueur, then you could find alchermes, rum, etc. 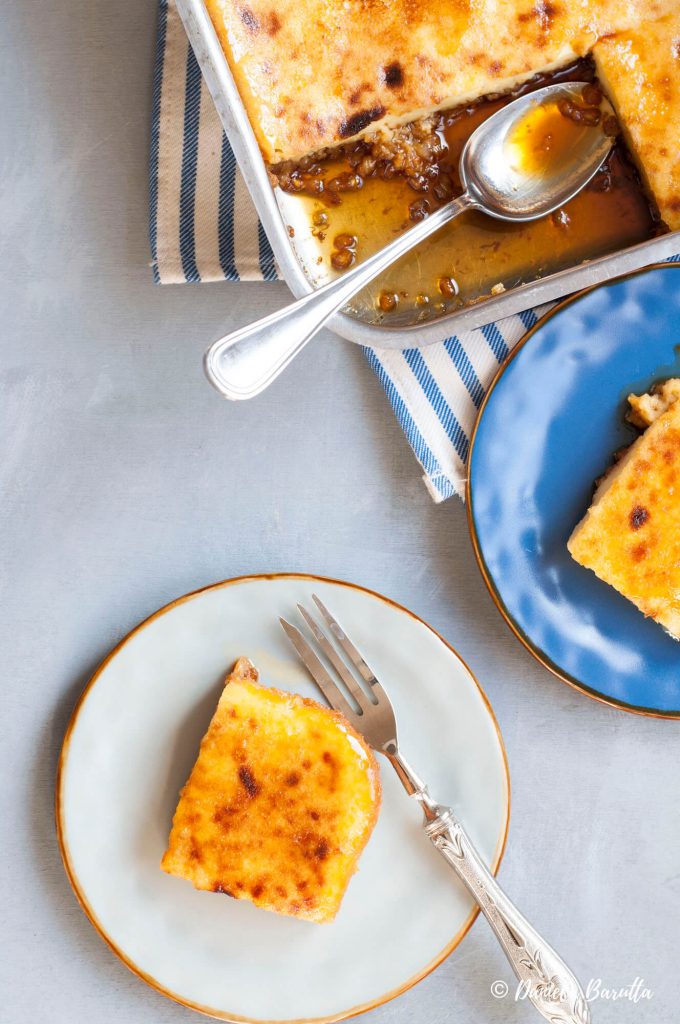 I had the best torta di riso last summer in Pariana, a small village above Massa, in a small bar known for its baccalà marinato (marinated salted cod fish), another traditional recipe from Massa. Silvio, the owner, didn’t tell me his secret mixture of spirits but he did confess that he always adds a small quantity of mint liqueur. And it didn’t surprise me too much, since I read in Petroni’s book, Il grande libro della vera cucina toscana, that in the past many people used to add one or two crushed mint candies in the hot mixture.

The recipe I’m giving you has become my own, since I adjusted it during the years according to my taste. Maybe it’s not too traditional, but I also add some caramel on the base and my custard layer is flavoured both with lemon zests and sambuca – anise liqueur – and it’s not too sweet compared to many traditional ones.

This is my contribution for this March edition of Cucina Conversations about Eastern recipes. For the other recipes head to the end of this post and have a look at my fellow bloggers’ posts. 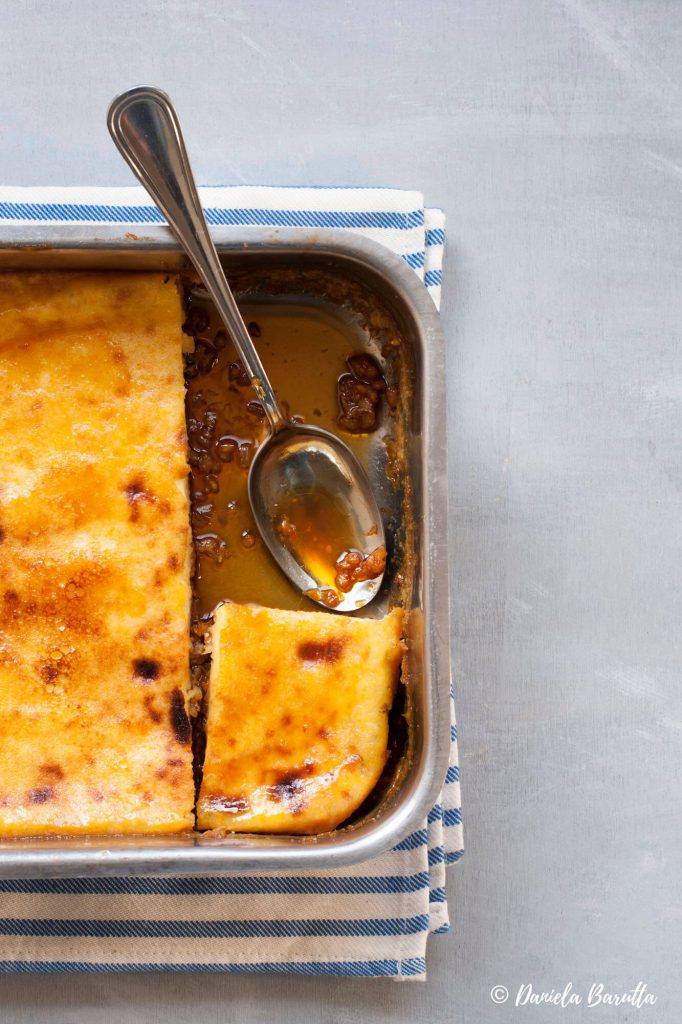 1.Boil rice for about 7 minutes, so you cook it al dente. Drain the cooked rice and let it cool down.
2.For the caramel follow the dry method: in a nonstick pan heat up the sugar over medium-low heat, without stirring and keeping an eye on it so it doesn’t burn. As soon as the caramel is ready, pour it over the base of the baking pan and cover it all.
3. For the custard: heat up the milk without boiling it. In a bowl whisk the eggs together with the sugar, add liqueurs and the lemon zest. Pour a spoonful of hot milk in the mixture and whisk well and then add the rest. Mix until well combined.
4. Put the cooked rice over the caramel and add the custard mixture. Bake at 170°C for about an hour. The last 5 minutes switch on the grill mode so that you get a nice and brown colour at the top.
6. Let it cool down and store it in the fridge until serving.

Have a look at other Eastern recipes in all other Cucina Conversations posts: 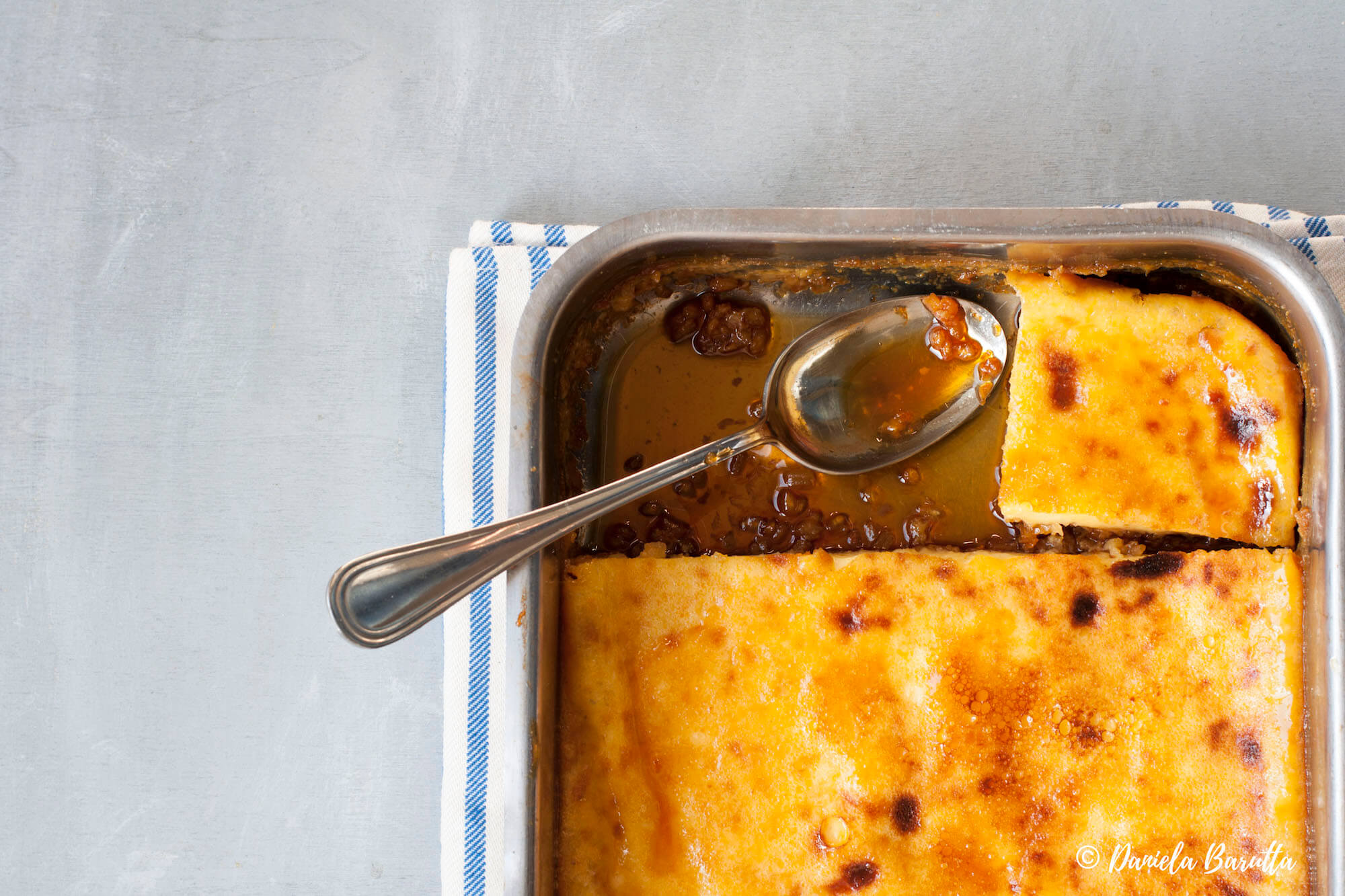