Cucina Conversations of this month is all about Carnival and its related recipes.

This Christian festivity, commonly associated with fun, masks and greediness, actually has a pagan origin, when the celebrations were dedicated to the fertility of earth, after the long break of winter.

In the area of Milan, where I was born and raised, we have Carnevale Ambrosiano, which is celebrated in a slightly different period compared to the rest of Italy. This Carnival takes places from the Thursday after Mardi Gras till the following Saturday – called sabato grasso (fat saturday). When I lived near Milan, I have never considered too much this festivity, apart from the years of scuole medie (the beginning of secondary school) when we used to play with foam (yes, terrible!) during the Carnival’s weekend. 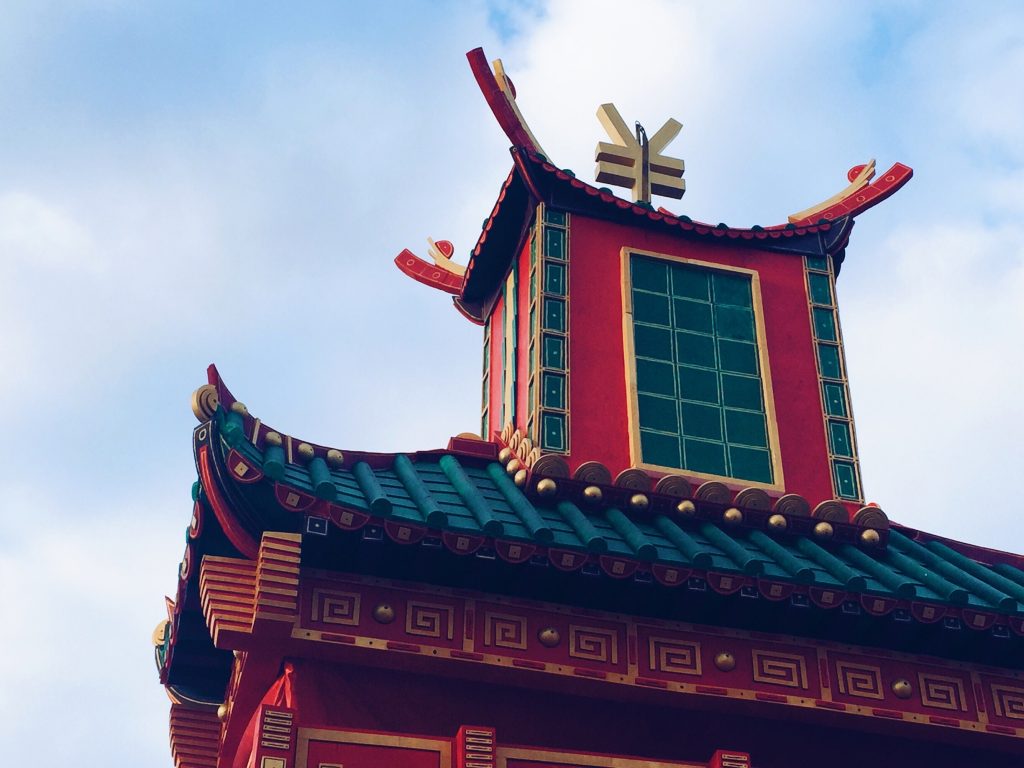 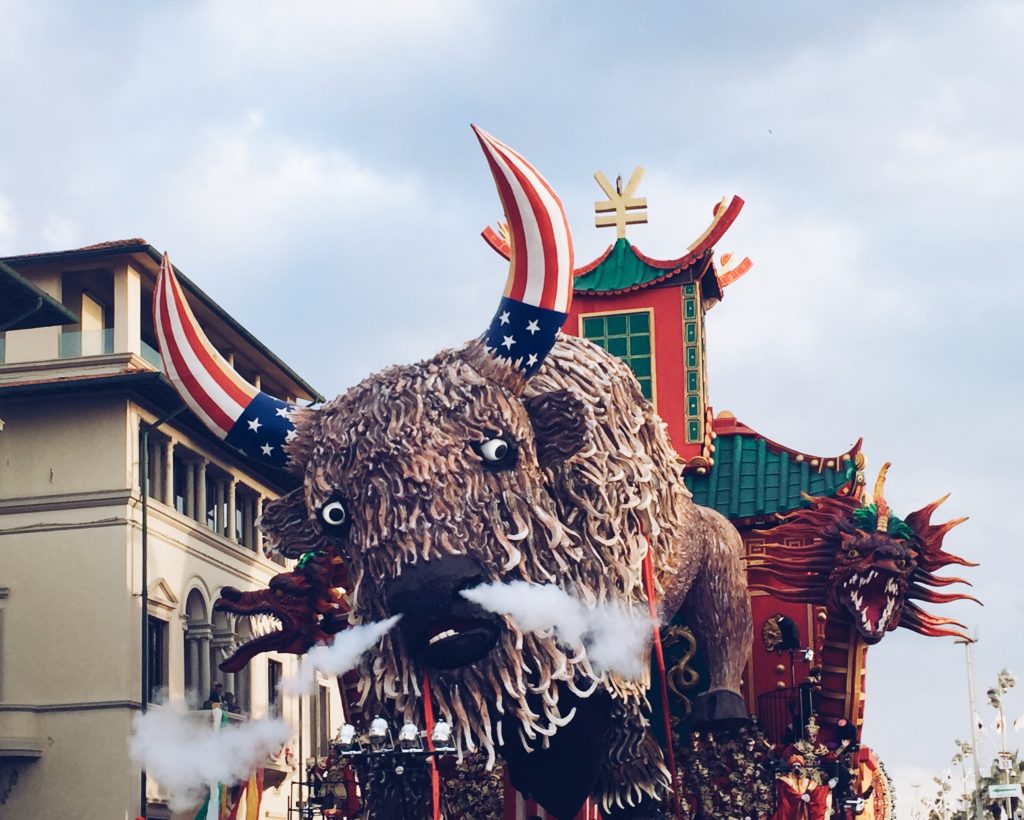 I understood and felt the sense of Carnival the first time I came in Viareggio during this period. It’s impossible not to be excited when you participate at the parade, one of the most beautiful in the world. The huge Carnival floats that almost touch the top of the buildings, and the engagement of hundreds of people – singing, dancing, throwing confettis and candies at kids – who make the tourist feel a part of this beautiful show.

This year I chose to test the recipe of this last one, since they are deeply involved in the local life, not only during Carnival.

“Bomboloni dolci belli caldi” (hot and sweet bomboloni) it’s what you hear when you bump into the stand of Misericordia on the promenade during the Carnival parade. Those words have been announced by megaphone for decades and even for me, that I wasn’t born here, are so comforting. And then, you can find the gorgeous frati – the Tuscan name for ciambelle (doughnuts) – of Nelli, a stand placed at the right of Piazza Mazzini (looking at the sea). They are my favourite during Carnival and I do think many people have the same opinion, considering the queue I have to make every time.

Here in Viareggio bomboloni and ciambelle, despite their calories, are a constant presence even during summer. Whether you’re laying in a beachclub near the promenade, or at the Lecciona free beach in Darsena, every day at five in the afternoon a lady with a basket full of freshly fried bomboloni will pass by, just in time for merenda.

If you can’t wait until summer – or five o’clock – you can find the best bomboloni and ciambelle at Gatto Nero, a kiosk in Pineta di Ponente, near the promenade. Gatto Nero’s ciambella is the first one I tasted here in Versilia, and I can still remember how surprised I was. It wasn’t too sweet, and deliciously fragrant, with a soft and melt-in-your-mouth inside.

Bomboloni and ciambelle are two different shapes of the same dough, that here in Tuscany is pretty light: no eggs, just a bit of sugar and butter or lard. So, it’s really different from two other similar treats, the Krapfen from Alto Adige and Graffe from Naples.

I had many recipes from different books – as the one from “Il Grande libro della Vera Cucina Toscana” by Petroni or from“Cucina di Versilia e Lucchesia” by Emiliana Lucchesi – I chose to try the version of Bruna, Giulia’s mother, a friend and a sommelier-to-be, as me. This recipe has been slightly modified from the original used by Gelateria Mirella in Darsena area.

For the procedure, I used the method I learnt from Paoletta di Anice&Cannella. 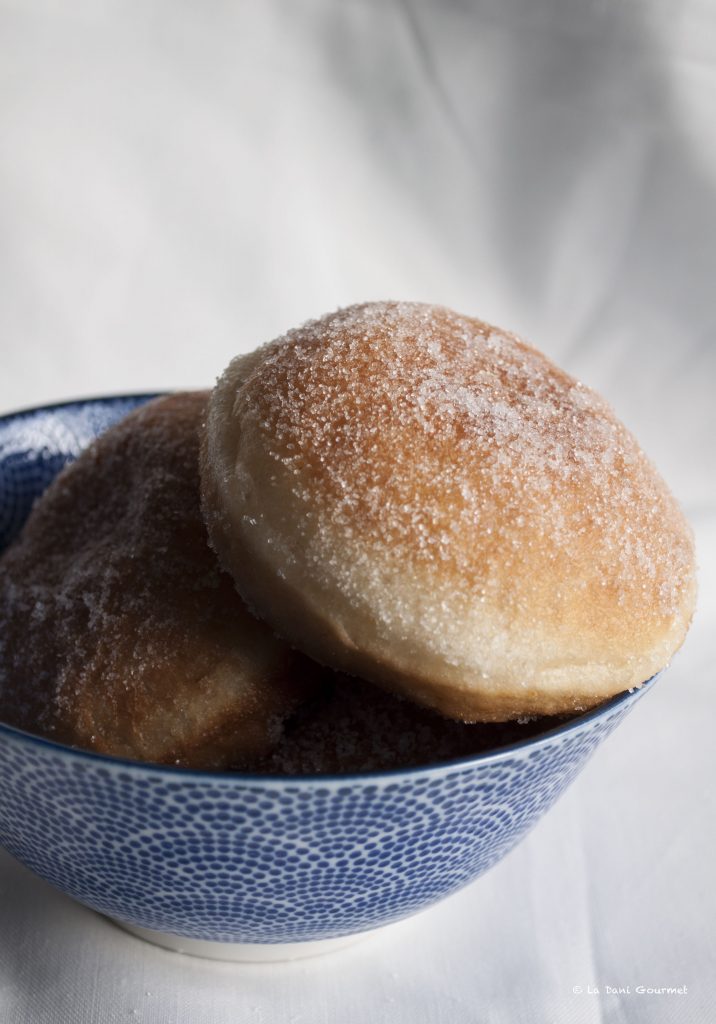 ingredients for about 12 bomboloni

1.Melt yeast in 100 g of water (taken from the total) and mix with 100 g of flour (taken from the total). Cover with plastic wrap and let the yeast activating for about half and hour.
2.Now insert the mixture in the bowl of a stand mixer, add two tablespoons of flour and mix well. Add half the sugar and a couple of tablespoons of flour, and continue mixing.
3.Add the remaining sugar, and alternate water and flour until you have finished the ingredients. Then add salt and continue kneading for about 15-20 minutes, so the dough can develop the gluten.
4.Now add the lemon zest, the seeds of half a vanilla bean, the lard (or soft butter), divided into three batches. Knead for some extra minutes, so that you get an elastic and smooth dough.
5.Put in a bowl and cover with plastic wrap, until it doubles. I put it in the oven with just the light on (about 28°) and in 2 hours it was ready.
6.Now flatten the dough, fold into three (look at the first three photos here), cover with plastic wrap and let it rest for about 40 minutes.
7.Roll out the dough about 1 cm thick, with a rolling pin. Cut all circles (I chose 8 cm wide) for bomboloni and make a central small circle for ciambelle.
8.Cover with plastic wrap for about 1 hour/1 hour and a half.
9.In a wok, or in deep fryer, heat up abundant vegetable oil and bring to 170°C. Cook bomboloni and ciambelle, just one or two at the same time, for about 3-4 minutes, paying attention to turn them halfway.
10.Drain well and put them on some paper. When still warm, cover with caster sugar.

They are delicious both plain, or stuffed with jam or custards.
The are better when still warm, or within a few hours.

For more recipes related to Carnival in Italy, have a look at the other Cucina Conversations posts: 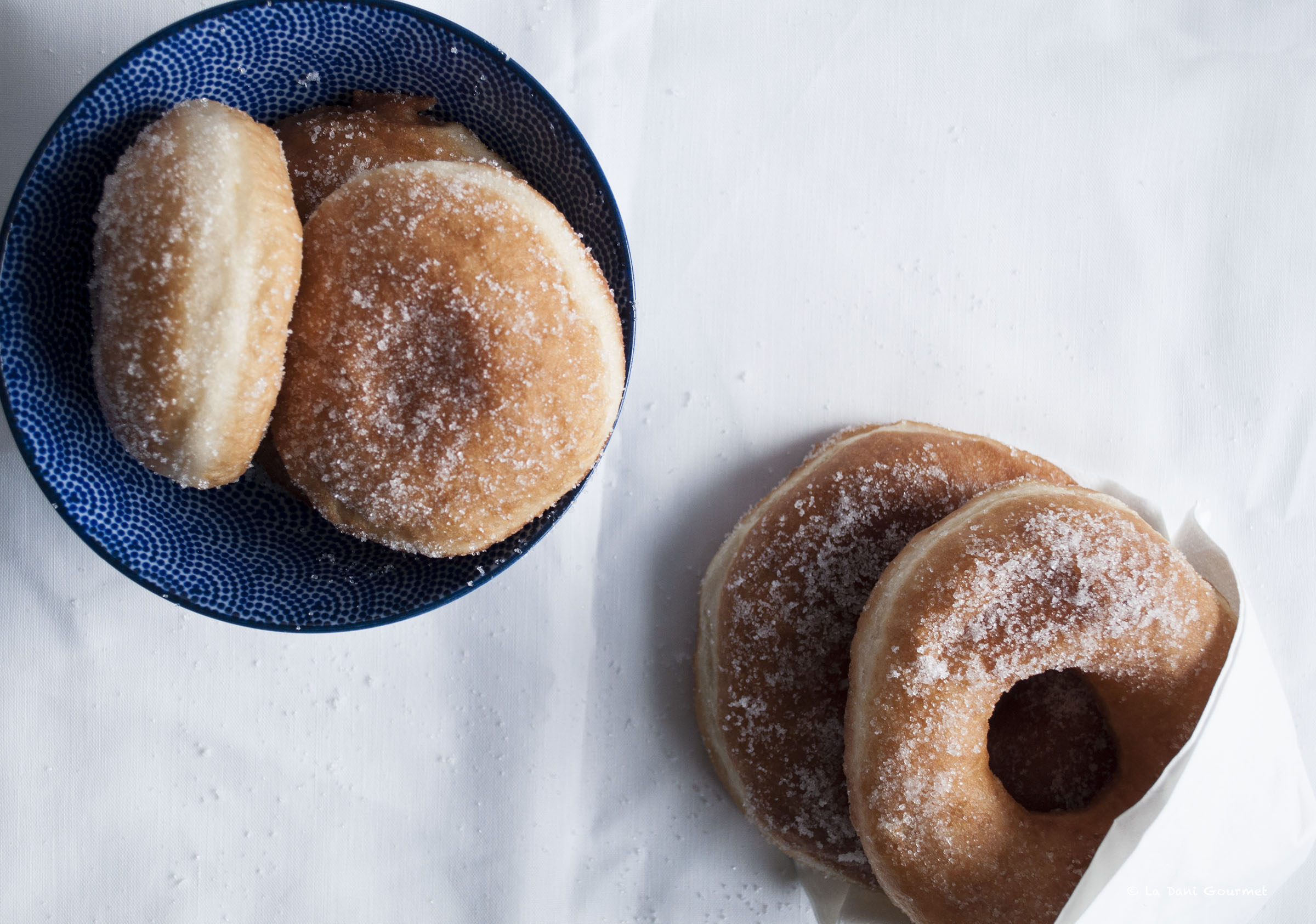