Omnivore, reducetarian, pescetarian, vegetarian, vegan. There are many words defining our food habits, and our awareness as human being grows, the more terms will be added in the vocabulary.

I consider myself a reducetarian, an omnivore that chose to eat less meat and of better quality. However, there’s a feature of my diet that doesn’t have a proper definition yer, but I chose to call it in Italian “stagionariana”, that could be translated with “seasonarian”.

Since when I started a vegetable garden, I changed also my habits during the rest of the year: I do not but fruits or vegetables that aren’t in season anymore.
From October onwards I do not eat tomatoes, zucchini, aubergines and peppers, despite from the one I preserved during summer (and sometimes when I go out for dinner, and I have no choice), and I welcome all the autumn and winter vegetables: pumpkins, broccolis, cauliflowers, turnips, kales, leeks.

Seasonal food is sustainable and less polluting, it’s tastier and it costs less. If these reasons aren’t sufficient to convert the fans of zucchini in December, I invite you to try my past autumn and winter recipes and keep a eye on my future ones, which will be delicious, affordable and made with seasonal ingredients. 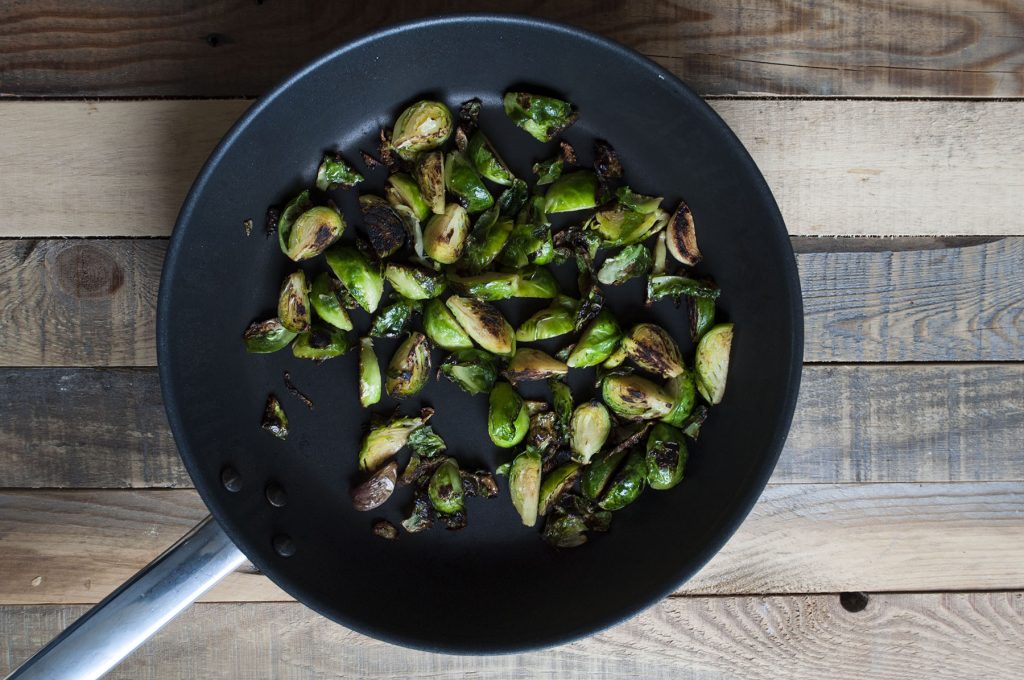 Today the protagonists will be leeks and Brussels sprouts, these last on frequently not so appreciated here in Italy.
As Sara Porro said in one of her stories on Instagram, the secret for good Brussels sprouts is the Maillard reaction, the chemical process that happens at high temperatures between proteins and sugars and makes the food darker and more flavourful.
So, more than other food Bruxelles sprouts do need to toasted. Believe me, there’s so much difference.

I saw this recipe the first time on Sara’s IG stories, and it is inspired from this from Bon Appétit Magazine. This is my version. 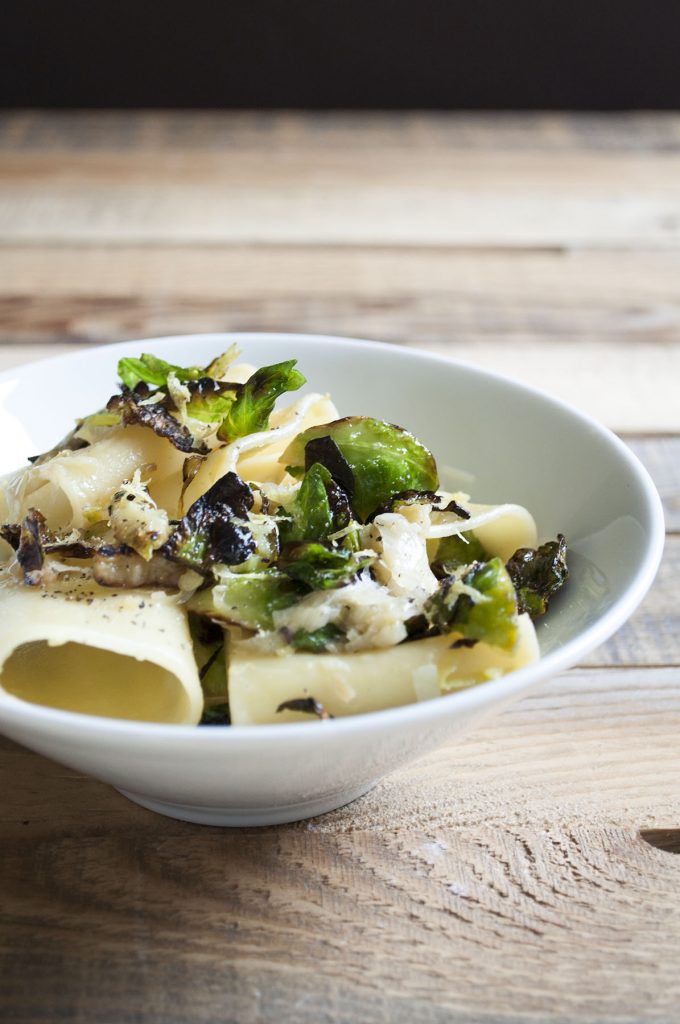 1.Carefully wash the leek, chop it thinly and let it sauté in a pan or wok with a couple of teaspoons of evoo and a garlic clove. Add one centimeter of ginger root, peeled and pressed with a garlic press. Season with salt and let it cook for about twenty minutes, adding some tablespoons of water during cooking to keep the leeks wet.

2.In the meanwhile remove the hard base of Brussels sprouts and cut them in four parts or in two, if they are enough small. Put them in a large non-stick pan, so that they are in one layer, together with three tablespoons of evoo. Let them  cook for three minutes with two tablespoons water, the continue cooking for other 3-4 minutes at medium-high heat until they get really toasted. Season with salt at the end.

3. In a pot of boiling salted water, cook paccheri following the instructions on the pack.

4. Drain the pasta and throw it in the pan together with leeks. Toss it well and add the Brussels sprouts. Serve with some lemon zests and some freshly ground black pepper. 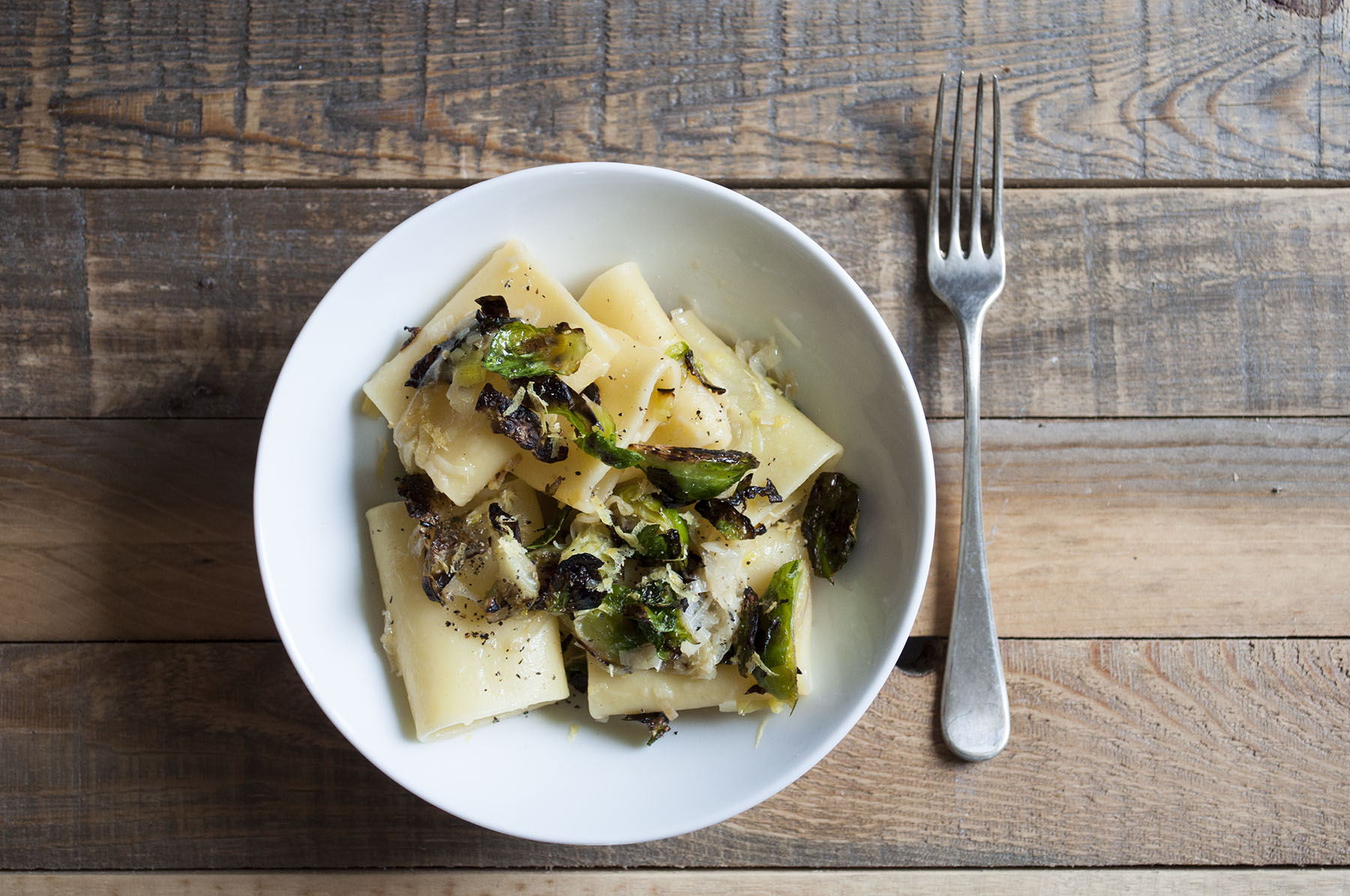