Tomato. It’s the outright protagonist of the Italian summer and symbol of our ability and flexibility to take advantage of the available resources. Originally considered as an ornamental exotic fruit imported from South America in the XVI century, it has been object of really successful culinary experiments since 1700. 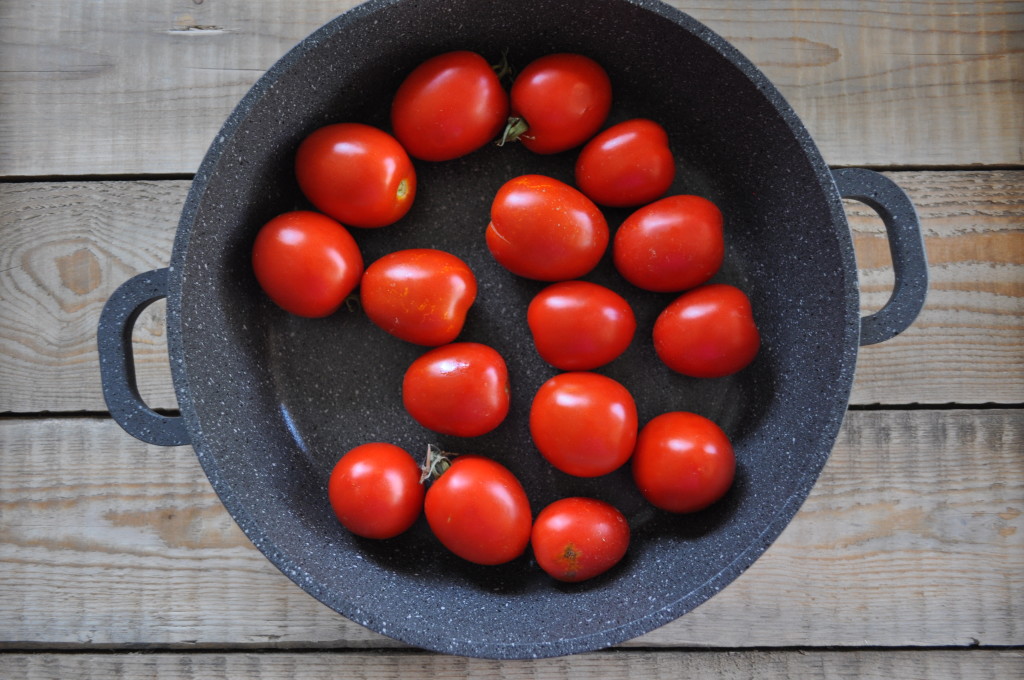 Tarte Tatin, as it’s known, it’s an upside down cake, where the apples cook in a rich caramel and are covered by a shortcrust pastry (pâte brisée).

The idea to use this technique for a savoury dish is brilliant, as in the Caramelised Onion by Michelin starred-chef Davide Oldani.

The inspiration for this Tomato Tarte Tatin comes from the book  “Da uno a infinito” by chef Stefania Corrado (so far, available only in Italian) and that’s the photo of this “tarte” on the cover image, that pushed me to buy it. The book is really cool, divided according to seasons, it combines technique with tasty but sophisticated combinations, and it makes you realize how you can mix the same ingredients in different ways, being stylish and creative.

I used medium-sized tomatoes, ripe but compact. Please don’t use tomatoes  which contain too much water, otherwise you risk to get a soggy pastry. I didn’t use the “the quick puff pastry” recipe given by Stefania Corrado, but I prepared an excellent and quicker pâte brisée (shortcrust pastry), taken from “Mastering the art of French Cooking” by Julia Child. 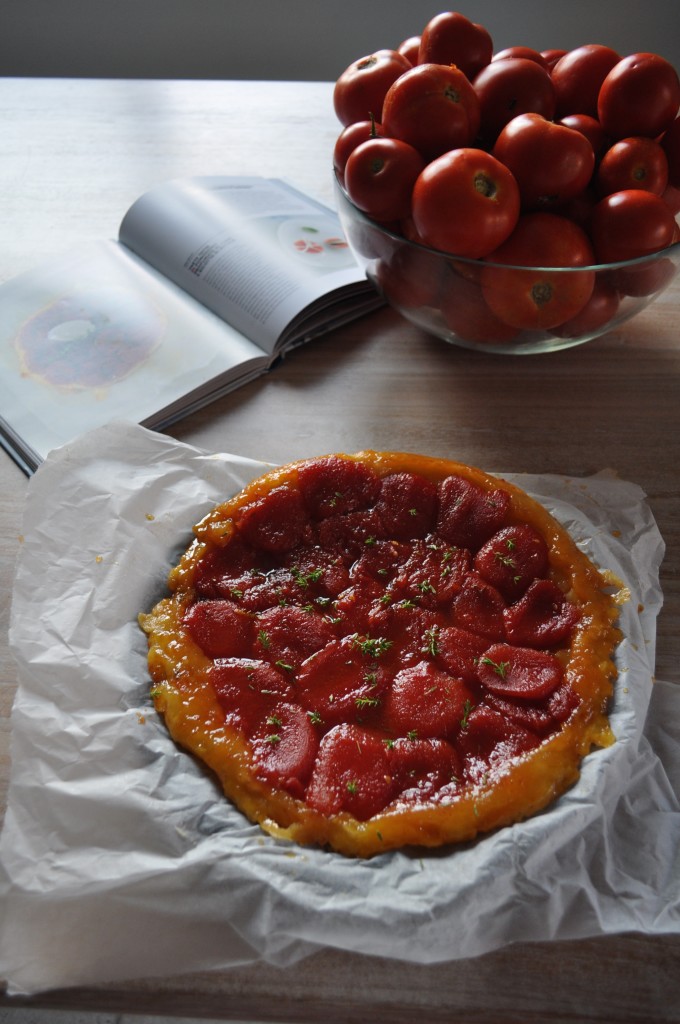 First things first, let’s prepare the pâte brisée. Cut the butter into cubes, and mix them quickly with the flour, until you get a sandy mixture. Use the stand mixer or make it manually, but in this case it’s compulsory to be rapid and have cool hands, to prevent the butter from melting.

Add the salt and enough water to gather the dough into a mass, which has to be “pliable, but not be damp and sticky”, as Julia Child states.

Put the dough on a lightly floured board for the so-called fraisage, the final blending of butter and flour. Using the heel of your hand, quickly press and extend the pastry on your board and then gather the dough again into a mass, helping yourself with a spatula. Cover with plastic wrap and let it rest in the fridge for at least 2 hours.

Halve the tomatoes and remove the seeds and the jelly-like part and let them drain on a strainer for 10 minutes (or even more). Season with evoo, salt, pepper and thyme.

Now caramelize sugar using the dry method. Put the sugar in a non-stick pan, switch on the heat and wait until the sugar turns into caramel. Pour the caramel into a non-stick round baking mould and let it cool down a bit. Spread pieces of butter over the caramel and place the halved tomatoes, so that you can see the concave part from above.

Roll the paté brisée quite thin (3-4 mm), cut it the size of the baking mould and place it over the tomatoes. Make some small cuts on pastry and properly tuck in the edges, so that it embraces the tomato filling.

Bake it in a pre-heated oven at 170-180° C for about 20-30 minutes. Let it cool down for some minutes and then carefully unmould it on a serving dish.

Tasty and elegant, this dish intrigues with its slight contrast between sweet and savoury.
Delicious as it is, both lukewarm or at room temperature. But it really should be a goodness with a quenelle of buffalo ricotta, as Stefania Corrado suggests. Enjoy! 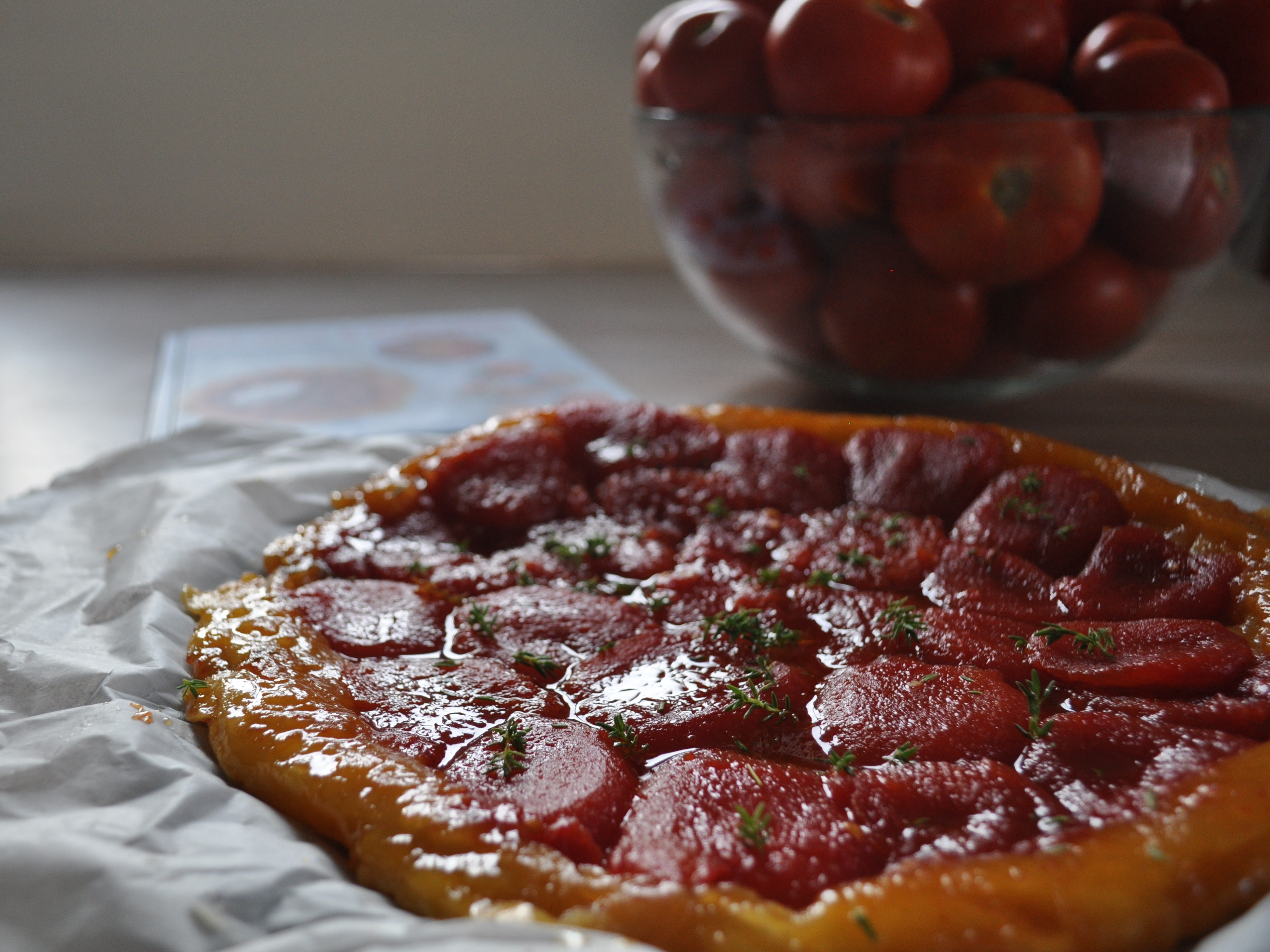