Last trips of our food tour in Puglia, before driving north the “Stivale”.
We drive on the statale that connect Bari to Altamura, and we stop in Toritto, the town of olive oil and almonds, as the welcome sign says. The reason why I came here is actually the local almond, a Slow Food Presidium. 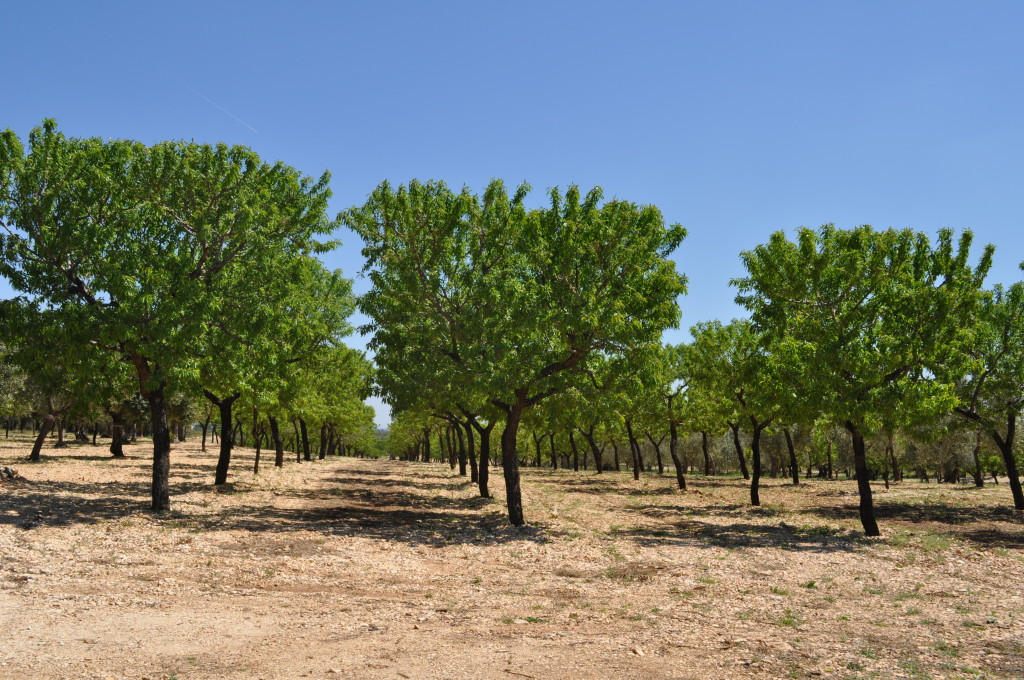 We explore the country around Toritto and we get fascinated by the almond trees. They are almost unknown to people from Northern Italy like me, so that at first I confused the almond tree with the cherry one, having similar flowers.
Since they set well on poor and dry soil, almond trees are an incredible resource for Southern Italy, and not just for the precious seed, or nocciolo, as it is called around here. Also the almond husk is very useful. It’s indeed used to light a fire, and it releases a special flavour when grilling or smoking (as for Capocollo) food.
Here in Toritto there are excellent local cultivar, whose names come from distinguished citizens, as the variety Filippo Cea, used also for some sugared almonds produced by Confetteria Mucci, as I explained here.

We enter a bakery to ask for some information and we end up tasting delicious local products, offered by a kind woman. Taralli, cookies with homemade jam, light and crunchy cantucci called “marzapane” and toasted almonds. I couldn’t help but buying a kilo, coming from the family almond trees. I have no idea which cultivar they are from, but they have a big size and a rich and buttery flavour.

The closer to Altamura we get, the more the view changes. Olive trees are replaced by green hills dotted by sheep.

We are in Alta Murgia, where I discovered a solid dairy tradition, especially from sheep’s milk, and a wide use of wild herbs into traditional cuisine. 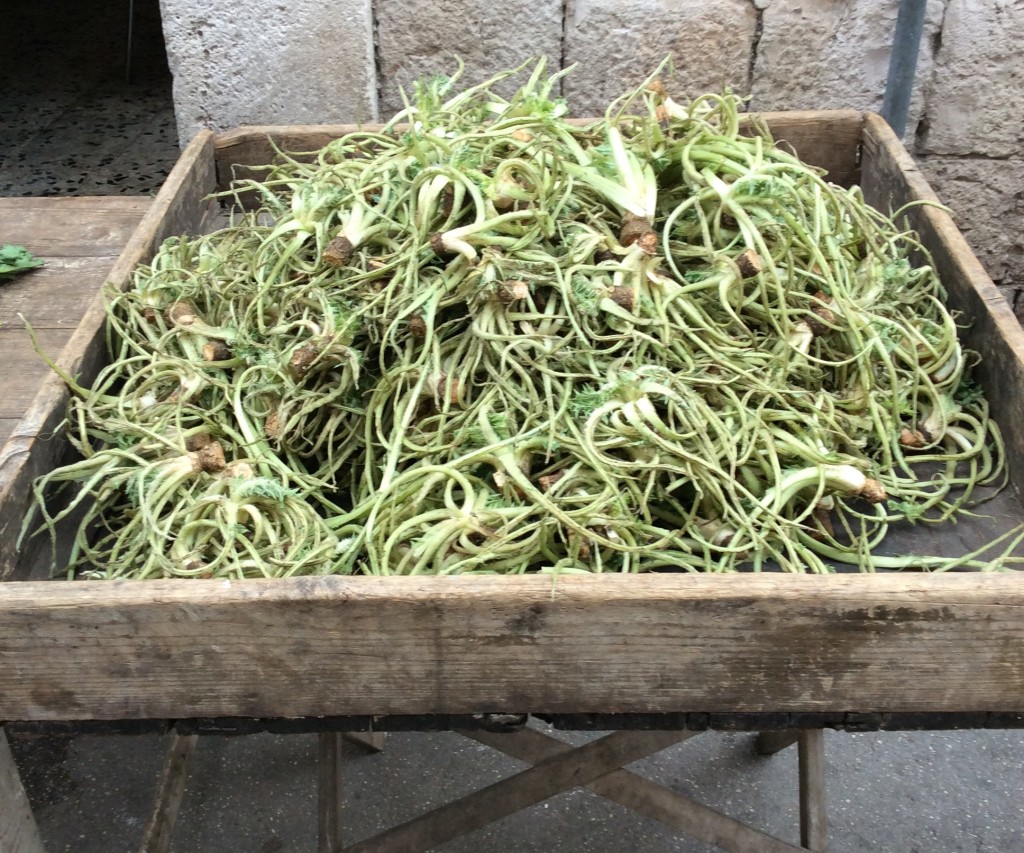 At Pein Assutt, a genuine osteria in Altamura, we found cicorielle (wild chicory), gathered in Murgia countryside and combined with the usual broad bean purée, cardoncelli (photo above), a wild cardoons only available at spingtime. Here in Murge, with the term cardoncello they usually refer to a typical wild mushroom, very common on restaurant menus and on family dishes together with other wild herbs, such as, little chards, wild fennel, sivoni, a local variety of wild chicory and the traditional lampascioni (photo below), bulbs of a plant similar to shallot but with a bitter taste. 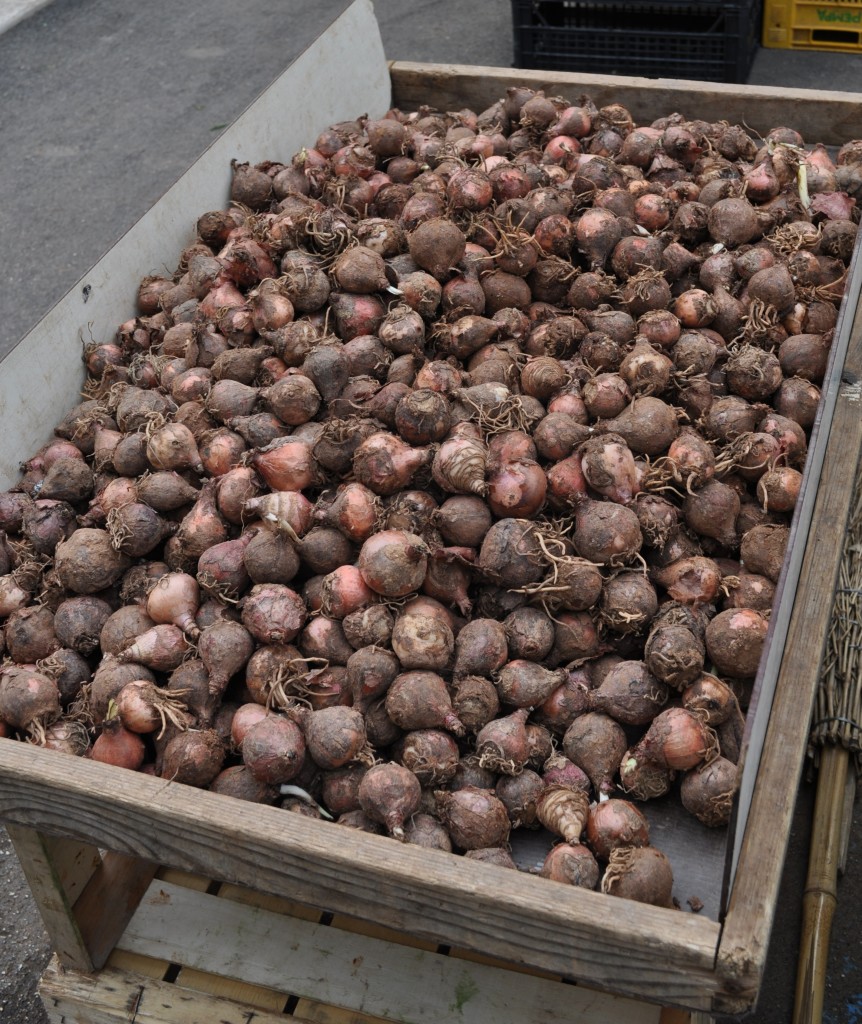 What makes famous and known this town is its bread, the first to have gained the DOP, in 2005.

The disciplinary of Altamura Bread DOP establishes that it could be produced just in Altamura, using double milled semolina flour, coming from the area of Alta Murgia, and sourdough.

The size can’t be less than 500 g in the traditional heart shape, and the slice presents a dark and thick crust and a pale yellow inside. The production method together with the quality of ingredients give character and taste to this bread and make it storable longer. This has helped the spreading of sales in Italy and abroad, becoming a celebrity among Italian quality breads. 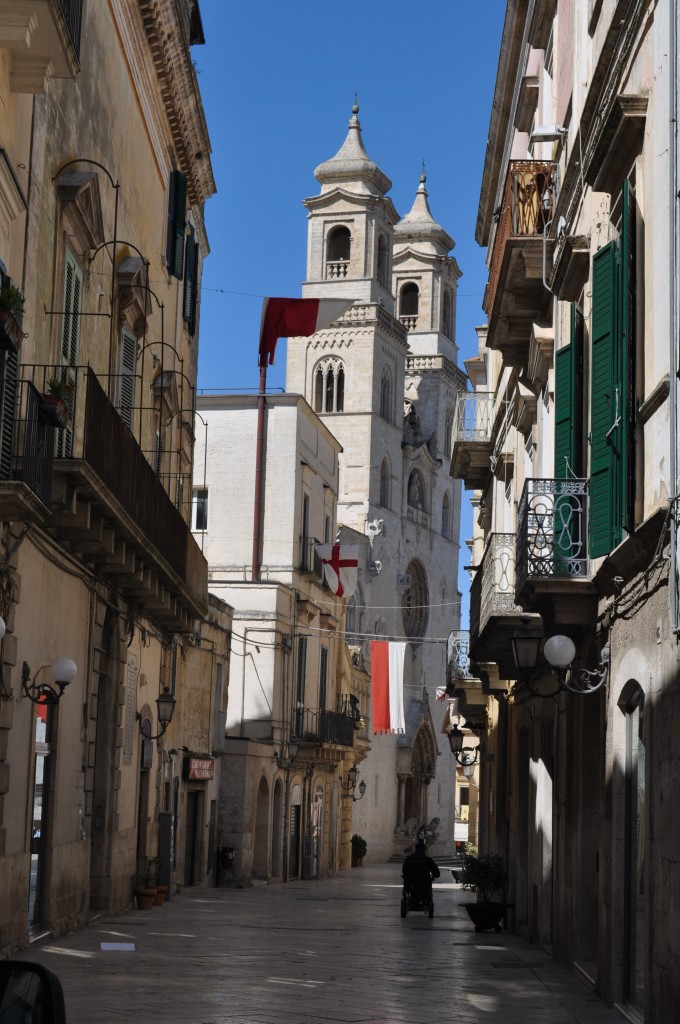 Following the advice of a friend native of Altamura, we go to Antico Forno Santa Chiara, placed in a center street and well marked with signs. Walking in the forno, we feel like travelling back to the past; we find ourselves in a sort of flat room where the production of bread and focacce takes place in front of fascinated tourists. The whole shop is around 5o square meters and that’s the oldest forno (oven) in town, built in the XVIII century to provide bread to the nouns of the close Santa Chiara monastery. In that moment they have just taken out of the oven the focacce baresi and I would have been heretical not to buy a good half… Light and soft thanks to the potato in the dough and well seasoned with tomatoes and oregano. Gorgeous, really a must for those coming to Altamura. 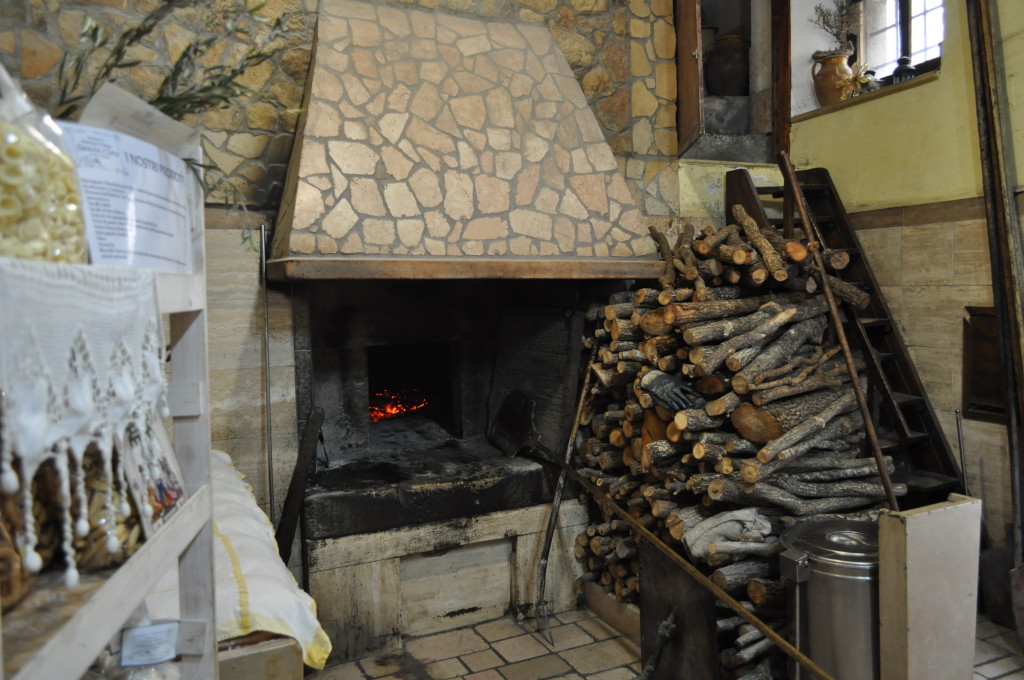 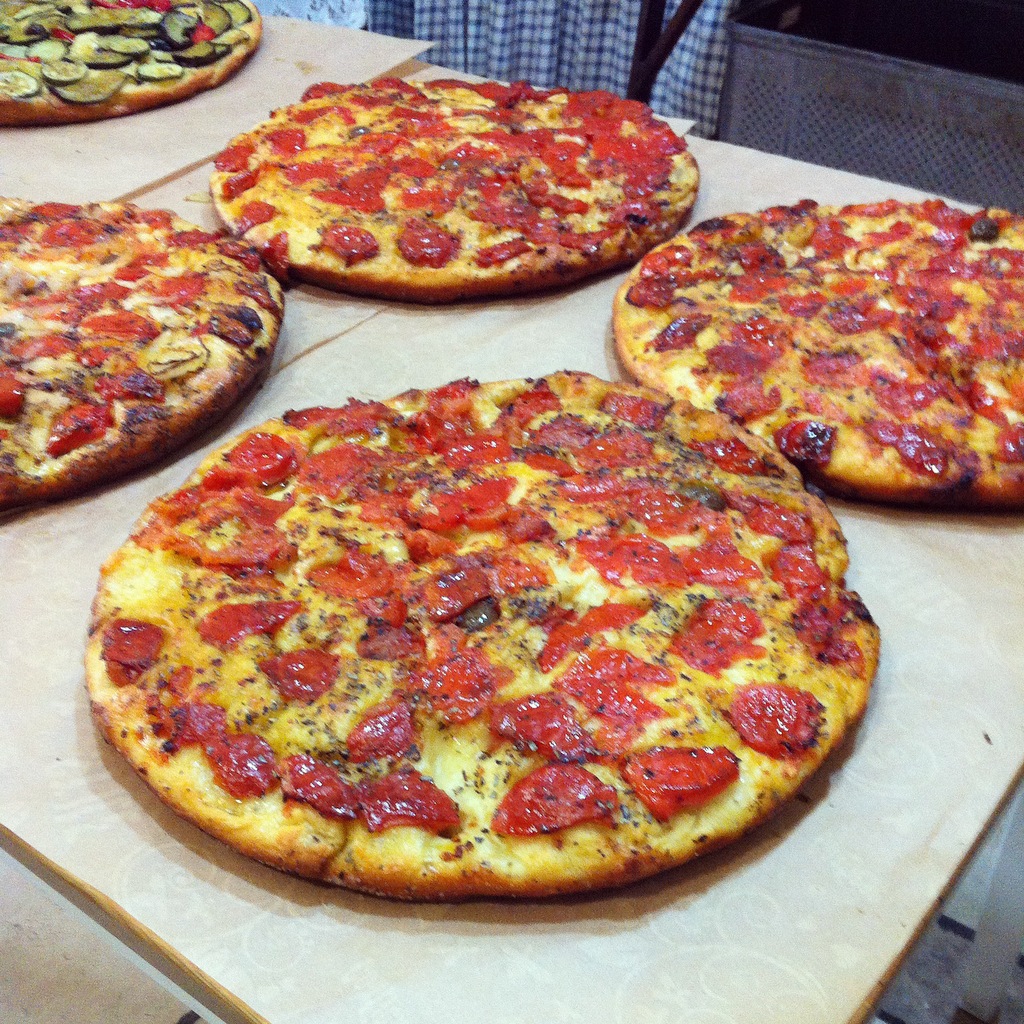 Walking in the elegant center of Altamura, just next to the Cathedral there’s Caffè Ronchi. Here you can taste or buy a bottle of a local amaro made with walnuts, herbs and strongly spiced with cloves. This is produced since two centuries by Famiglia Striccoli, using the recipe of the monk Giuseppe Ronchi, from which comes the name Padre Peppe (Peppe is the abbreviation of Giuseppe, and Padre is the Italian way to refer to priests or member of the clergy). Buy a bottle and keep it in the freezer, ready to be offered to friends at the end of a dinner. They will thank you.

Even though already full with focaccia, I couldn’t leave this town without visiting Pasticceria Reale. I have been told that here the pastries called Tetta delle Monache (literally Nouns’ breast) of Altamura have born. They are also called Sospiri and are made of sponge cake, stuffed with a rich custard made from the mixture of Italian custard and whipped cream. Light and fresh, they are a must-taste together with the incredible almond paste biscuits they produce since more than a century. 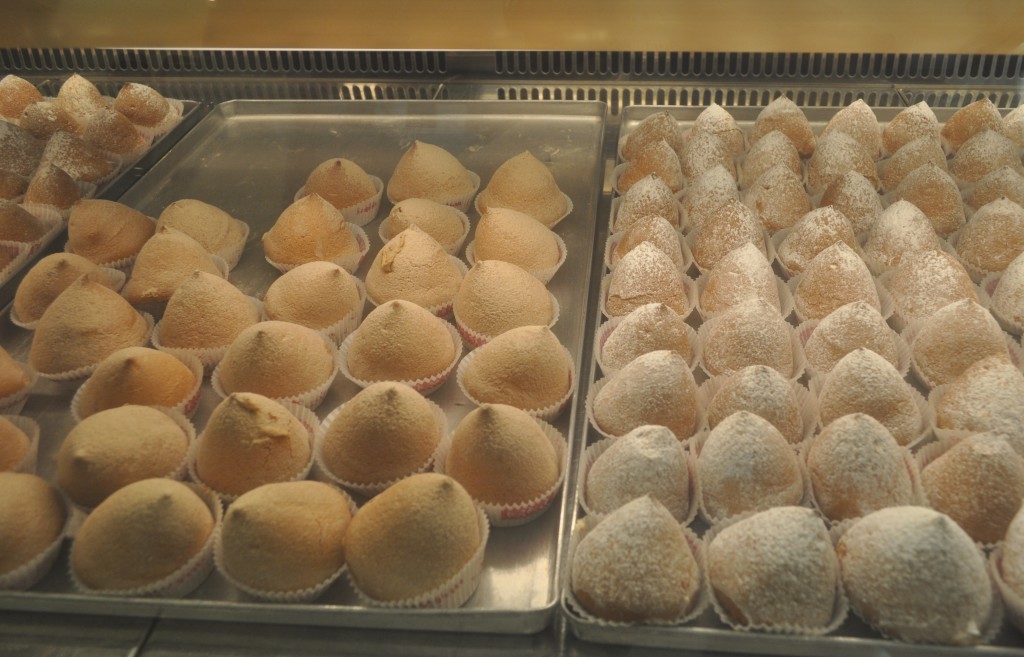 In Altamura I discovered a gourmet soul much wider than expected. The town is lively and elegant, the food is amazing and various, people are kind and helpful. I’m really happy to have stopped here.