The beautiful countryside we met before reaching Trani is dominated by countless olive trees, the majority cultivar Peranzana and Coratina, interrupted sometimes by almond trees. The abundance of olive trees seduces and reveals that Puglia is the biggest producer in Italy of extra vergin olive oil. 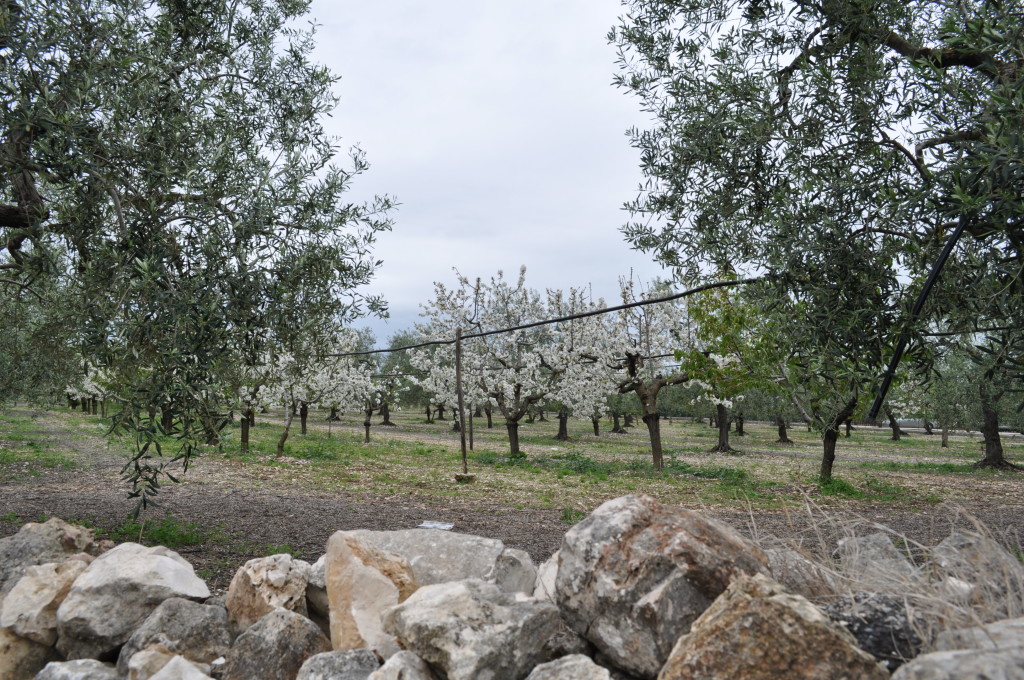 We arrived in Trani (here below the port) on Saturday’s late afternoon, and after some difficulties to get used to this kind of traffic, we managed to find the lovely  B&B Quattro Camere a Trani, in the city center. The Italian southern hospitaly showed immediately up. Antonio, the owner of the B&B invited us for an aperitivo, maybe because he noticed we were tired and exhausted. And walking in the streets, reaching the bar, I started looking around and realizing how beautiful and elegant this city was, dominated by the pale Pietra di Trani (Trani Stone). 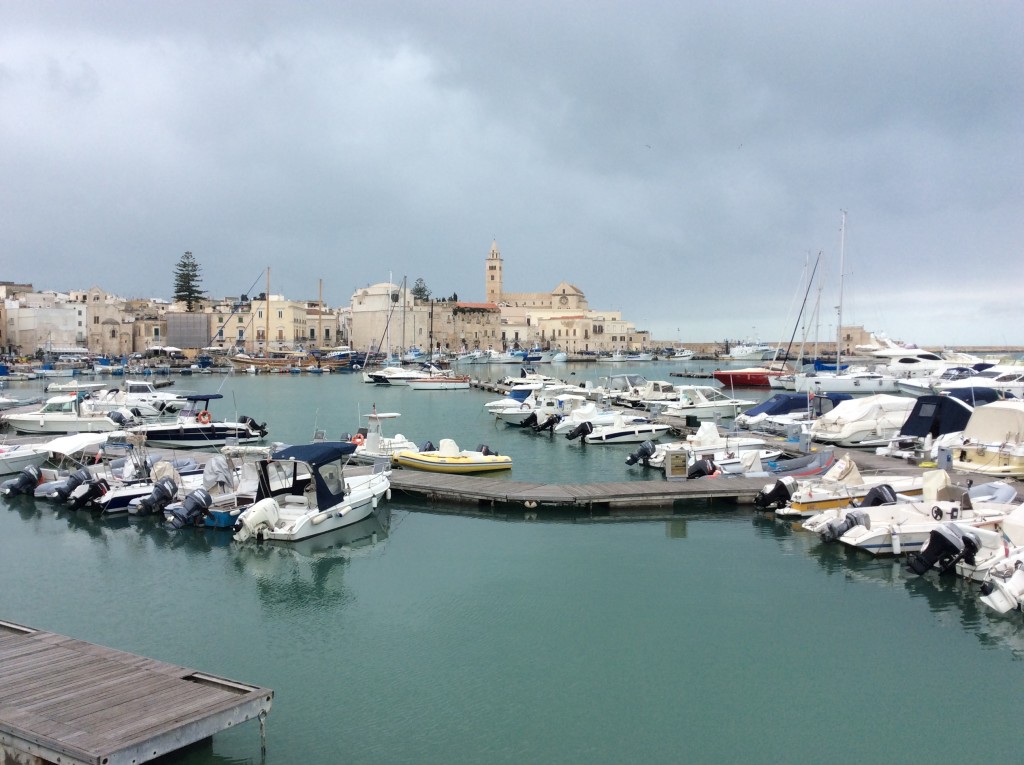 I immediately recognised the meat-centric soul of this land. During our whole trip in Puglia, indeed, we met Bracerie, typical restaurant dedicated, as the name suggests, to the barbecue: beyond classic grilled meat, you can find also the sweetish horse meat and other local specialties, as bombette of Valle d’Itria or gnumeredd, a roll made of lamb offal.

The food and cooking in Puglia is incredibly various, there are plenty of diary products and veggie dishes. In the braceria where we had dinner in Trani, Taverna Marì, I tasted for the first time a dish well-known in the whole region: favette e cicorie, broad bean purée with sautéed chicory. Simple but delicious, fava beans are mellow and nutty which contrasts the bitterness of chicory. And we had also cime di rapa, broccoli rabe, as a side dish. In Italy orecchiette with broccoli rabe is a kind of symbol of the Apulian cooking and food, which is in reality much more various and wholesome than expected. Broccoli rabe here are amazing, with a balanced bitterness and a good proportion of leaves and broccolis. A real goodness. 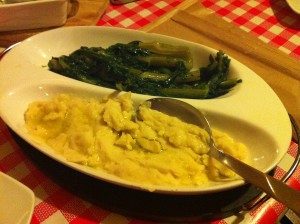 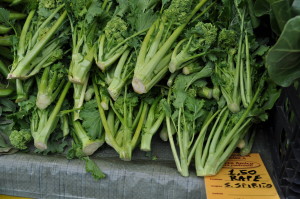 The true reason that brought me in this area is Andria and its most sensual and rich diary product: the Burrata.

The Burrata of Andria, now undergoing the process to be granted the IGP label, was originally produced to use the mozzarella leftovers. It consists, indeed, of a shell of pasta filata cheese hiding a humid and rich stuffing of cream and stracciatella, which is still pasta filata cheese cut into stripes. It’s a pity i couldn’t see the production and get more information. 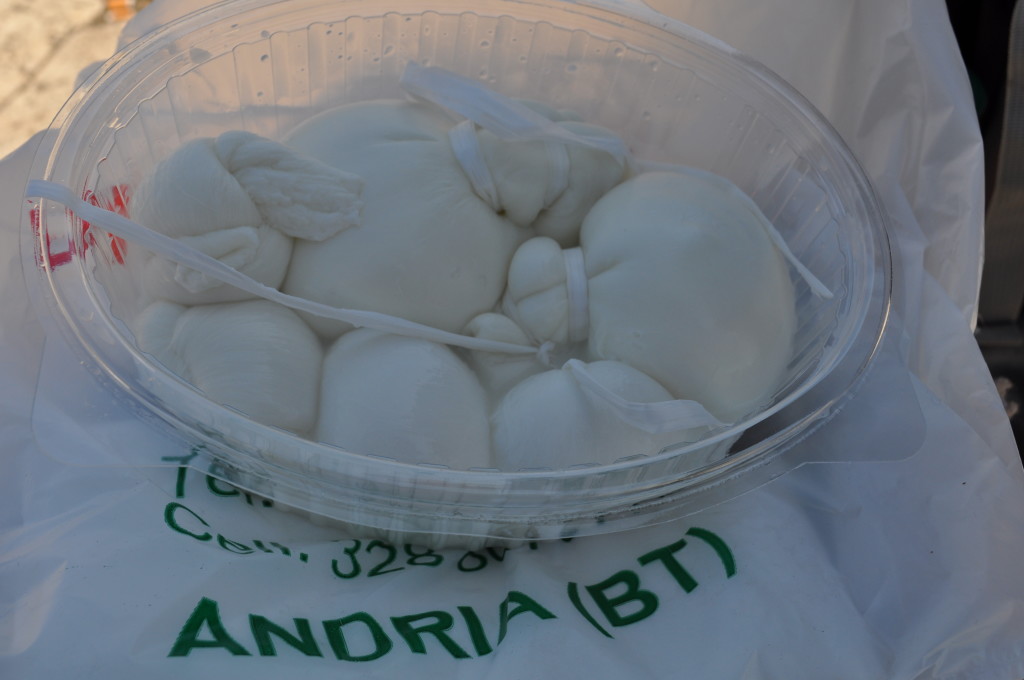 After visiting  Castel del Monte, an Unesco Heritage site amazing both for the architecture and the location, driving in Andria we noticed the sign of Museo del Confetto. Even though it wasn’t in our program, we decided to stop there, maybe persuaded by the intense chocolate aroma you can smell in the distance. The cost of the guided tour is 2€ per person, and it features tasting of dragées and sugared almonds. The comparison is well predictable, but I love Roald Dahl and I swear I felt I was in a smaller and more realistic, but not less fantastic version of Charlie and the Chocolate Factory. Here below you can see the copper tools, called bassine, used to start the sugaring of almonds. 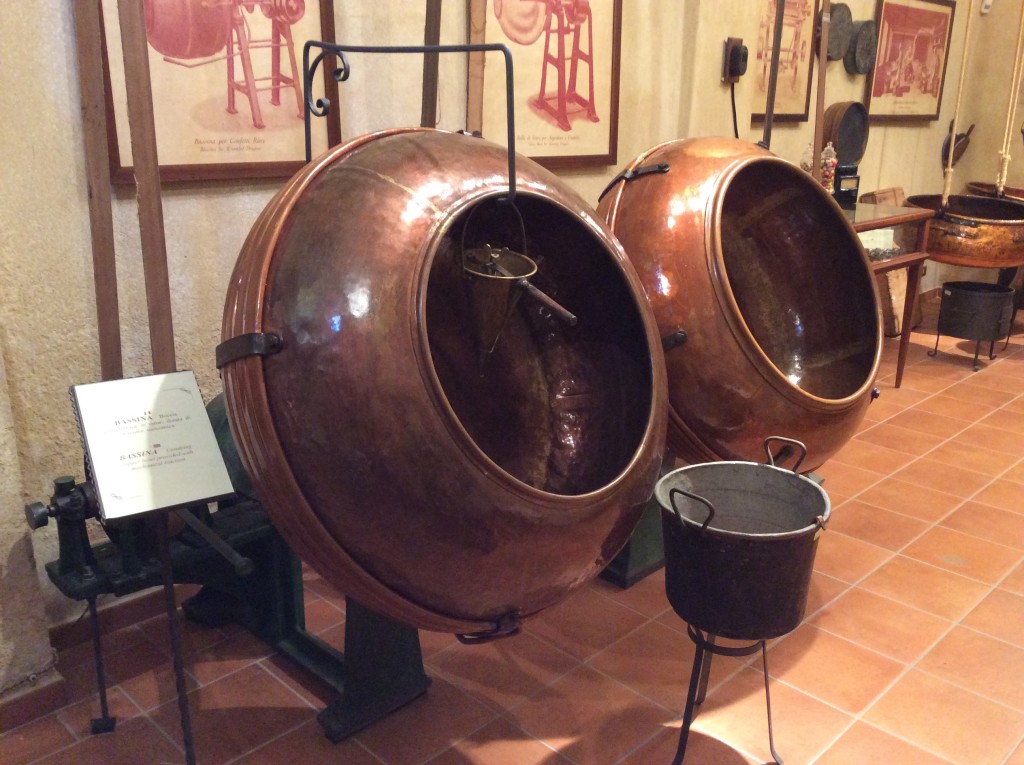 Rosalba, our guide, passionate and very well-informed, told us everything about the story of this confetteria, now at the fourth generation of ownership, and about the excellent ingredients they use. Only the best, as Almond of  Toritto, an Italian Slow Food Presidium, the Almond of Avola, considered the best, or the special Halzenut of Piemonte IGP. My favourite was the Donna Michelina, a dragées made with the Almond of Toritto, covered by an amazing paste made of Sorrento lemons. Incredible nice also the Tenerelli, core products of Confetteria Mucci, which are sugared almonds or hazelnuts covered by soft chocolate. These little jewels are also protagonist of an ancient tradition in Andria, the Petresciata. During Carnival, the mother-in-law used to visit the bride-to-be to make a petresciata, technically to throw gently (at least I hope) the Tenerelli at the future daughter-in-law, as a fertility wish. 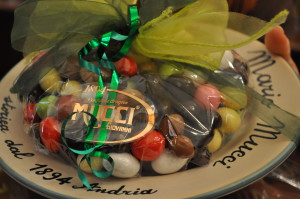 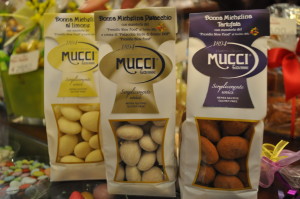 Following Rosalba’s advice, we went to buy some freshly made burrate at  Caseificio Asseliti & De Fato. We brought them to Porto Santo Spirito, where we hoped to find the their famous red prawns and improvise a gourmet bruschetta with burrata and raw prawns. We arrived late and there were no fishermen, but It didn’t matter because the place was awesome and our burratine were amazing. 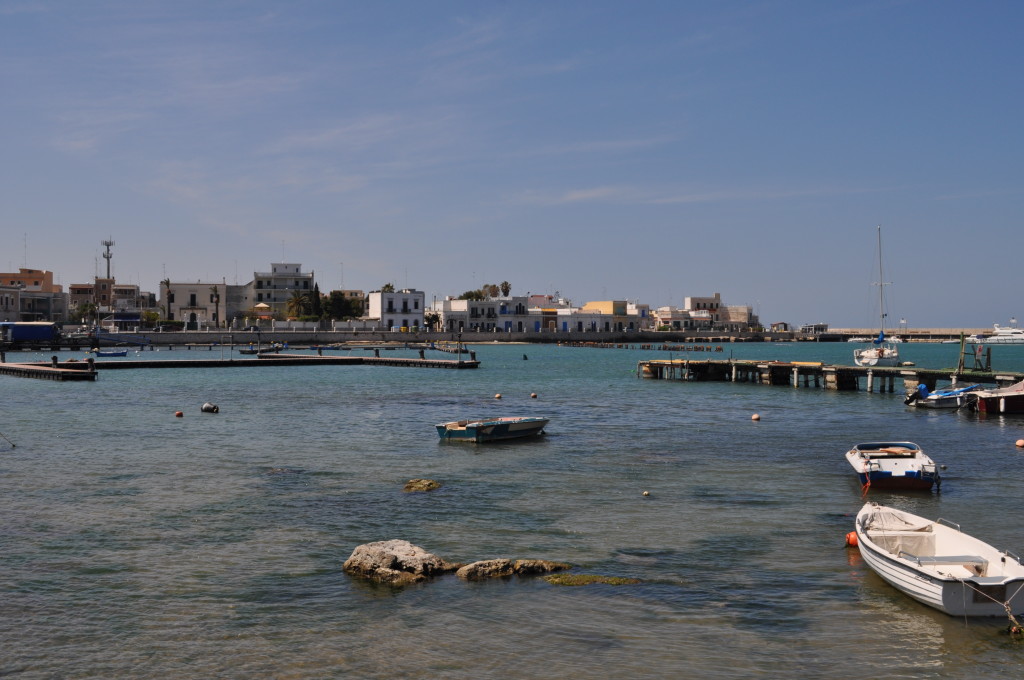 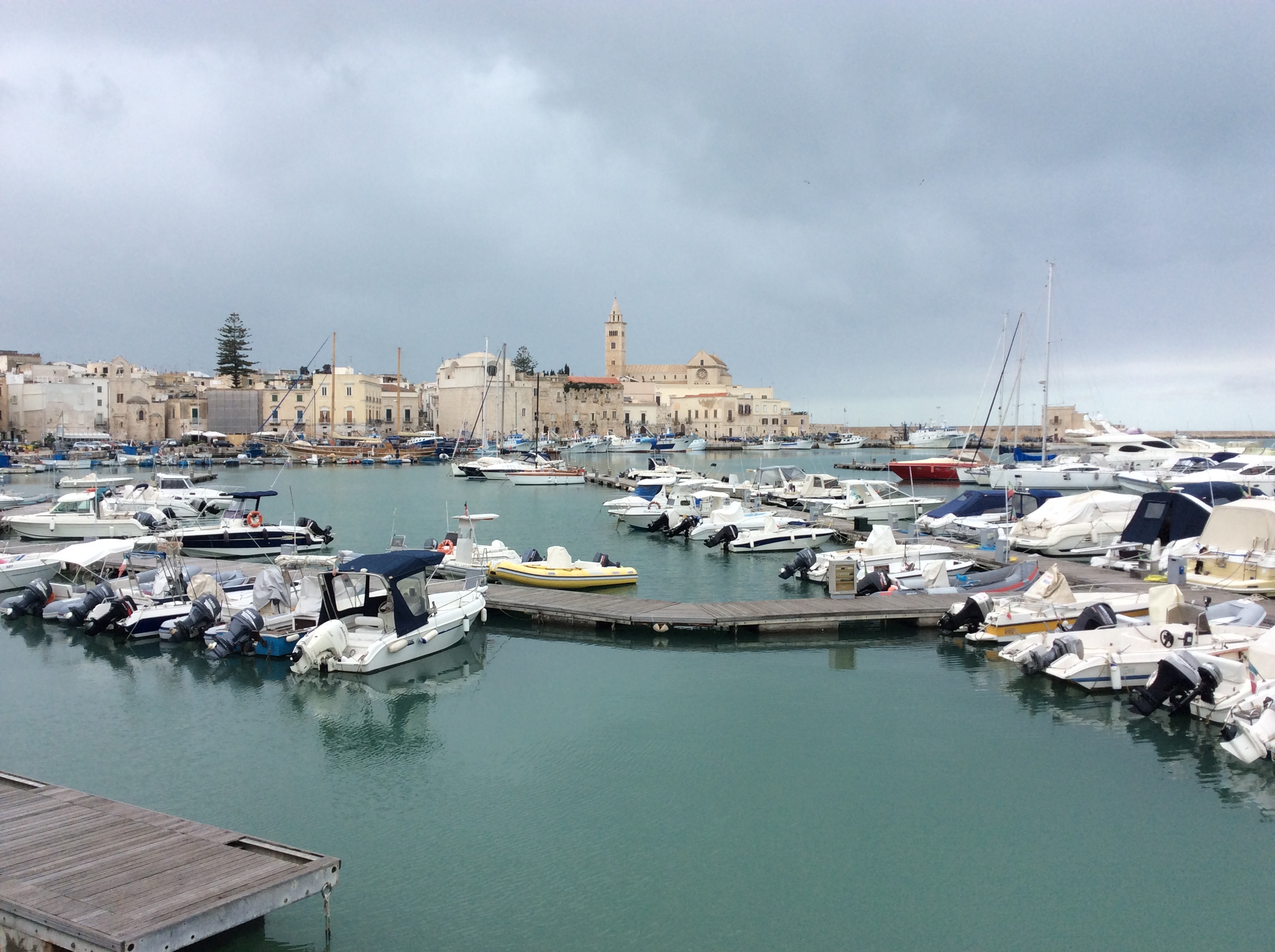