I was born and raised in Italy, and despite my love for traveling abroad, I made several vacations in my country, both as a child with my parents and in the last years together with my partner. As you should know, I always try to taste the most typical products and dishes, so I can feed my natural interest for this beautiful world.

Despite all the travels, and the many books/magazines/blogs I devour every day, regional Italian cuisine is always able to surprise me with something I’ve never seen before.

Sicily is a clear example. Its cuisine has been deeply influenced by the numerous dominations Sicily experienced through the centuries, and each one left something to the gastronomic heritage of this beautiful island.

For sure, the Arabic influence was one of the strongest, and the one that fascinates me most. I discovered that Muslims brought in Sicily some important cultivations, such as oranges and pistachios, and they first introduced the preparation of sweets with almonds, honey and egg white, giving birth to the Sicilian tradition of pasta di mandorle.

The Muslim occupation influenced also savoury dishes, and it is reflected in the passion for agrodolce, which is the combination of sweet and sour, as in caponata, in orange salad, in San Bernardo sauce and in the frequent use of raisins in primi piatti or in secondi.

Flicking through the pages of “Ricette di Osterie e Genti di Sicilia” published by Slow Food (and that I already quoted for sarde in beccafico), I noticed the zucca in agrodolce, a dish I’ve never tasted before. 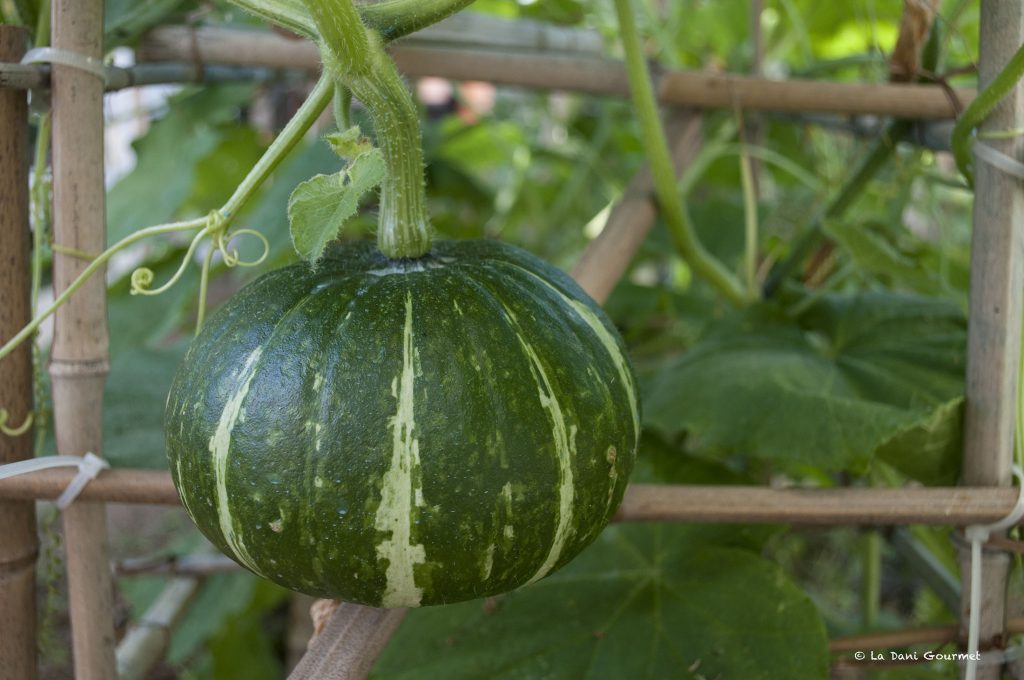 Squashes are in full season now, and I was lucky enough to have one kabocha from my garden, who grew unexpectedly from some fresh seeds we threw away last winter. So, I decided to try this dish, and it turned to be so delicious that I couldn’t help but sharing it.

In the original recipe, squash is fried in extra vergin olive oil, but I opted for grilling. And believe me, it’s still great, both as a starter or a side dish. 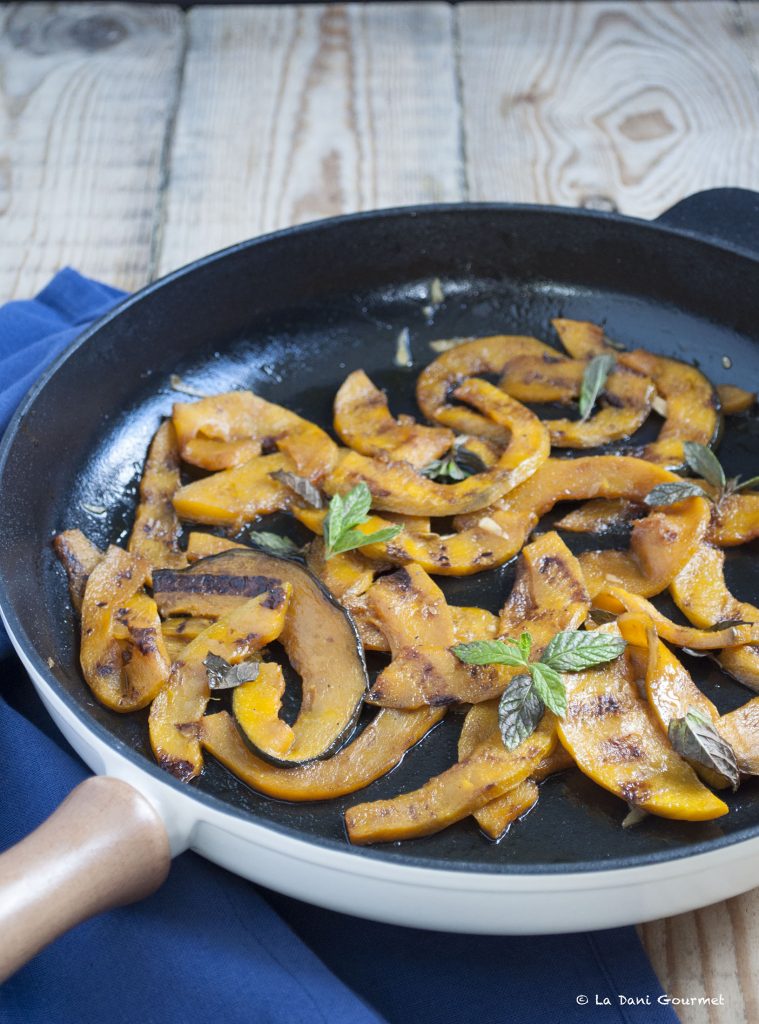 1.Peel the kabocha, remove the stringy parts with a tablespoon, and cut it in thin slices, of about 4 mm thick.
2.Brush each side of the slice with evoo, and grill them on a very hot grillpan for about 3-4 minutes per side, or until they are cooked.
3.Halve the garlic clove, remove the green germ inside and reduce into thin slices. Heat the garlic in a separated pan together with a couple of tablespoons of evoo. As soon as it starts frying, add the vinegar and sugar and let it cook at medium/low heat for a couple of minutes.
4.Add the grilled kabocha, and continue to cook for about 5-8 minutes, until the liquid is completely reduced.
5.Serve it warm or at room temperature together with some fresh mint. 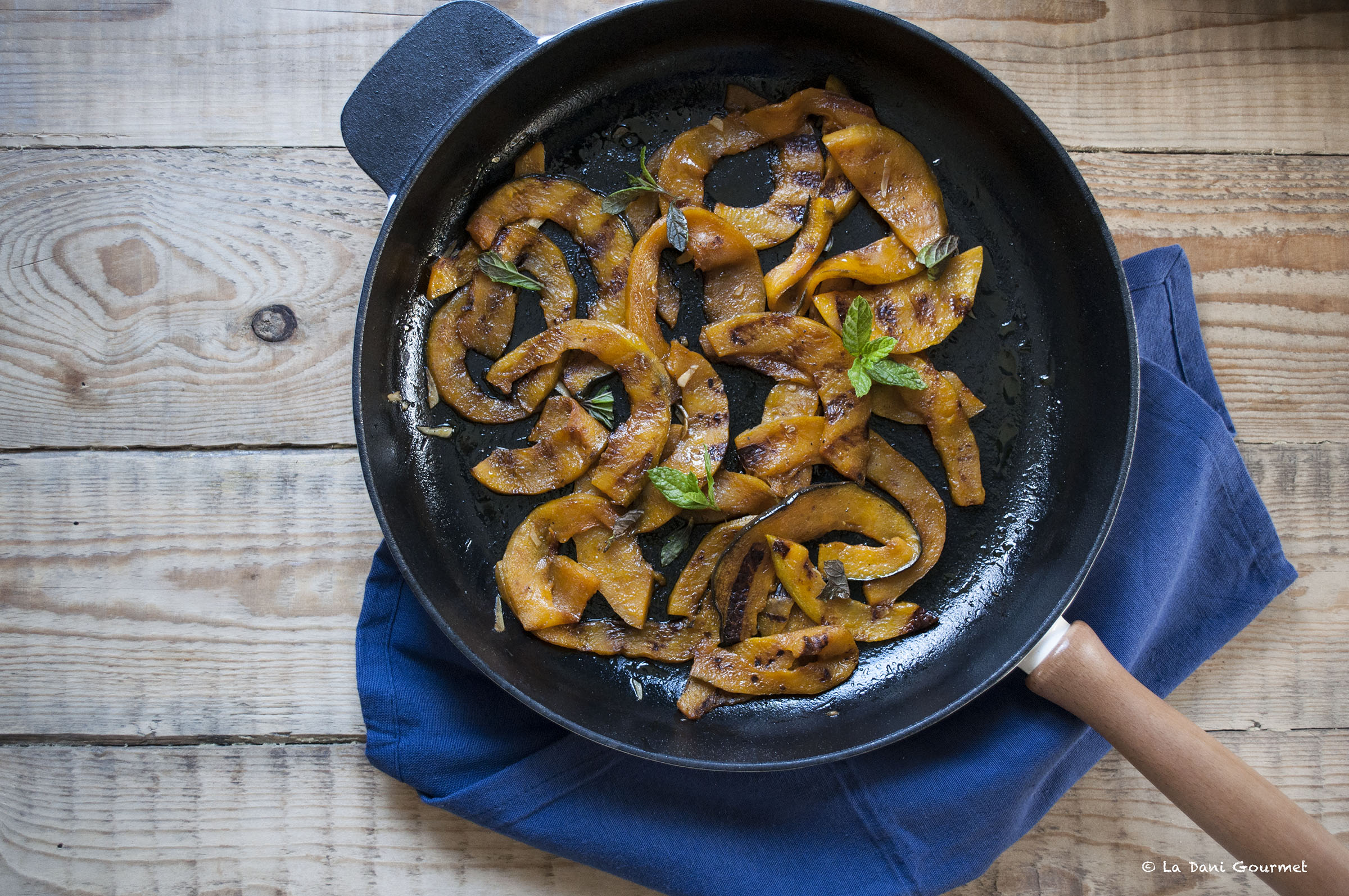