Saturday the fourth of March marked the beginning of the thirteenth edition of Identità Golose, the international food congress, that gather in Milan chefs, journalists and people of the food industry to speak about the new trends in the best restaurants in Italy, and abroad.

This year the theme continued last year’s topic “La Forza della Libertà” (the Strength of Freedom), but the focus was on Travel.

Identità Golose is a great opportunity of learning. I attended the first day and that’s what I learnt and discovered.

1. LOCAL PRODUCTS, IDEAS FROM THE WORLD

“It’s the ideas that have to travel the world, not the produces”. With this sentence Cesare Battisti immediately shows his opinion about the theme and the current situation. No more low-cost sea basses or salads from Australia and Israel, but more products from local producers, worked with the chef’s creativity, using ideas and techniques from all over the world. An example is one dish Battisti presented, la Polenta e il Capriolo (Polenta with roe deer),  where the meat is served as a tartare, made with the tataki tecnique, and where he used a self-made fermented lentil sauce, instead of the soya sauce.

2. KITCHEN AS THE PLACE OF CULTURAL STRATIFICATION

“Future is connecting deep roots with new branches, so that you can generate new fruits. And the kitchen is the place where this happened at first”

Maybe, it’s because her restaurant, L’Argine a Vencò, is located at the border between Italy and Slovenia, but Antonia Klugmann has always been opened to the “other”.
And so, one of the dishes she presented – Rapa, crauti e tartufo (Turnips, sauerkraut and truffle) – is based on a specific variety of cabbage, which is fermented following the tecnique of the “queen of fermentation”, a girl from Ukraine who belongs to her kitchen crew. The cabbage is mixed with 5-7 % of salt, and some apples, which help the fermentation and give more aromas.

3. FROM ASIA WITH LOVE: THE FERMENTATION

In Europe we usually associate it with bread, wine and beer, but in Asia they have always fermented vegetables and sauces. Fermentation was a fil rouge during Saturday in Identità Golose: the fermented lentil sauce, made by Cesare Battisti, the sauerkraut of Antonia Klugmann – that I spoke about in the previous paragraphs – and one of the dishes prepared by Valeria Mosca, expert in foraging and cuisine, and founder of Wooding Lab.

In her Bottarga di lago con mele selvatiche fermentate due volte (lake fish eggs with double-fermented wild apples), the apples are subject to a first lacto-fermentation and then to a quick alcoholic fermentation. Valeria Mosca also unveils that the fermentation was already used in our Alps for some specific herbs, such as Rumex Alpinus.

The afternoon in Sala Auditorium was all dedicated to pasticceria, with an introduction made by Iginio Massari.

I couldn’t miss the speech of Corrado Assenza, the eclectic pastry chef and owner of Caffè Sicilia in Noto, who shows us his concept of a dialog between savoury and sweet, where the pastry chef has the task to find the natural sweetness of food.

On the stage he describes dishes balanced between sweet and savoury, as the Beef of Franco Cazzamali, marinated in honey for seven days and then combined with salicornia and candied ginger. Or the sorbet of mauro catanese, a seaweed usually sold with coquillages at the fish market in Catania, and here served with a grapefruit sorbet. 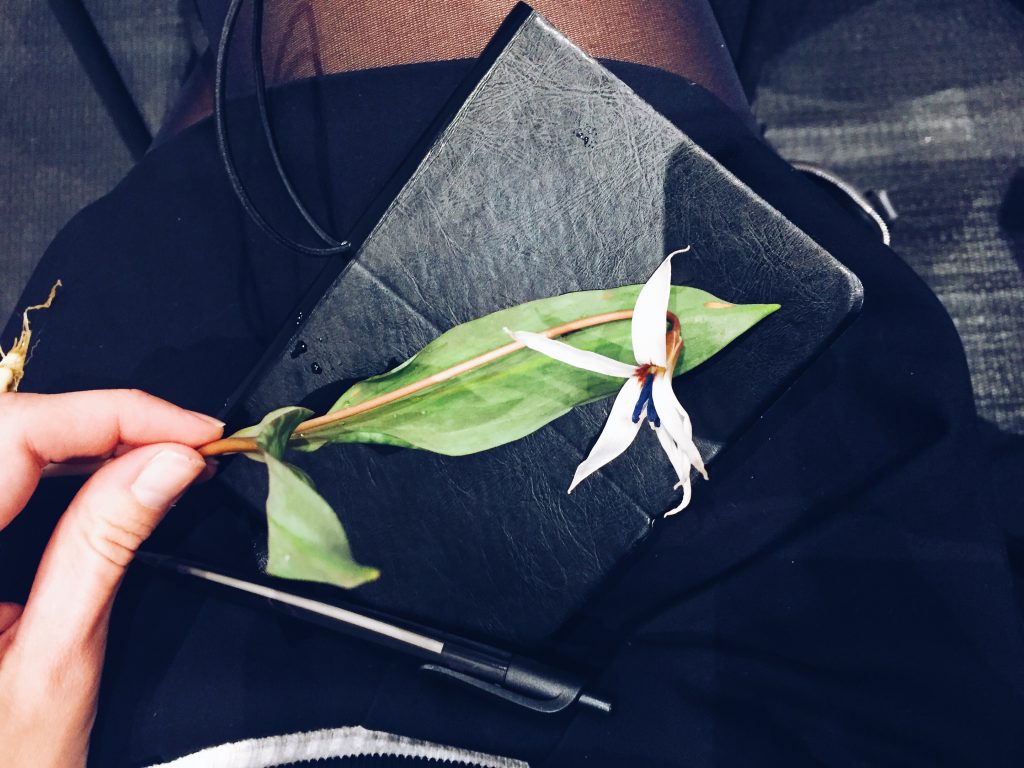 5. SEASONALITY AND THE INTEGRITY OF PRODUCES

“Seasons are determined by the wild produces”. That’s how Paolo Lopriore, chef of Il Portico in Appiano Gentile, recalls us the concept of a true seasonality, while preparing his dish of Cucina Conviviale – Sciatt, patate affumicate, bietole, olio di noce e nocino (Sciatt with smoked potatoes, small chards, walnut oil and nocino) – created to reawaken our palate after winter.
Nothing is more seasonal than a wild herb. Valeria Mosca showed us different edible flowers, herbs and roots, from the most known wild garlic, to the dog’s tooth violet, a flower now available in her area in Brianza, which has the flavour of a sweet almond (it’s true, I tasted it).

Not only seasonality, but also respect for the integrity of produces. Cesare Battisti in his Risotto con cime di rapa, salsiccia di Bra e croccante di aglio, olio e peperoncino doesn’t waste anything of the vegetable (he sauté the rapini tops and make an extract with the leaves).
Also Antonia Klugmann shows her will to respect the produces, without wasting anything and giving back their integrity on the plate. In her dish the fennel is destroyed and then recreated with its elements: the heart is cooked in its broth, and combined with liquorice, star anise and chocolate; the stems are the crunchy component; the leftover are braised and used for a puree; finally the pollen of fennel flowers.

Article Name
Identità Golose 2017: What I learnt in a day