Driving south, along the Adriatic Coast of Marche, just after Ancona we discovered the “Riviera del Conero”. This charming rocky coast interrupts the monotony of sandy beaches and it astonishes with clear water and wild landscape. 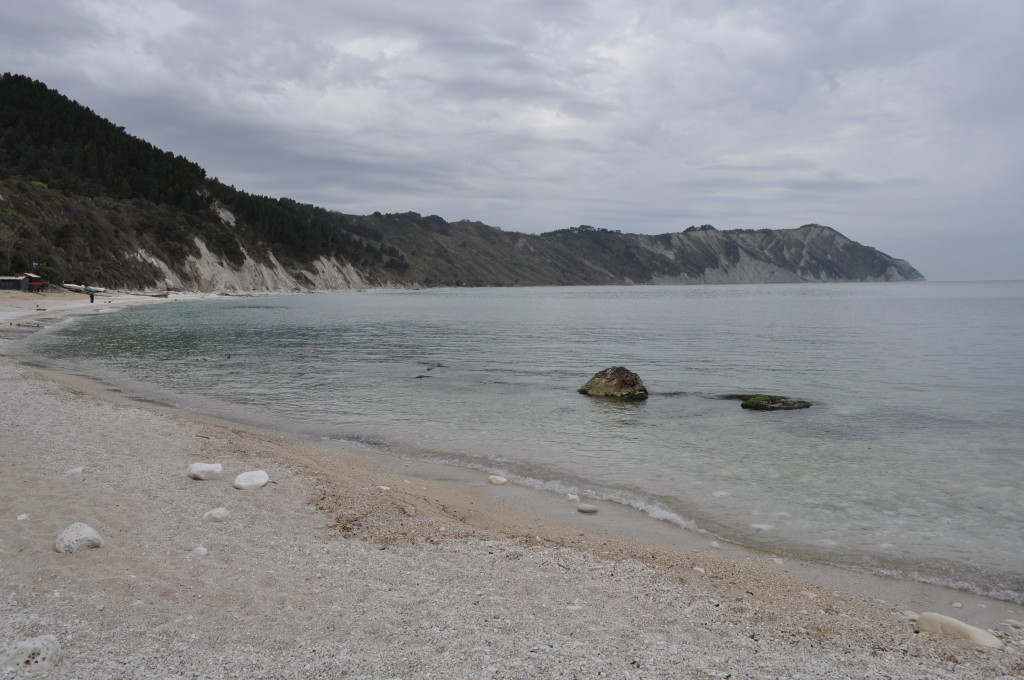 In this context there’s the Portonovo bay, where the wild Mosciolo of Portonovo grows, a Slow Food Presidium since 2004.

Mosciolo is the local term for mussel (in italian it would be cozza), and also a registered mark to indicate specifically the wild mussel that grows only here.
Mussels are bivalve mollusks that tend to white-yellow in males and to orange-red in females and they’re one of the most bought type of fish in Italy;  maybe because they’re both nutrient and cheap.

The President of “Cooperativa Pescatori Portonovo” – Mr Sandro Rocchetti – explains me that almost the whole production of mussels comes from breeding, while the mosciolo of Portonovo grows naturally from the rocks of Conero Coast. 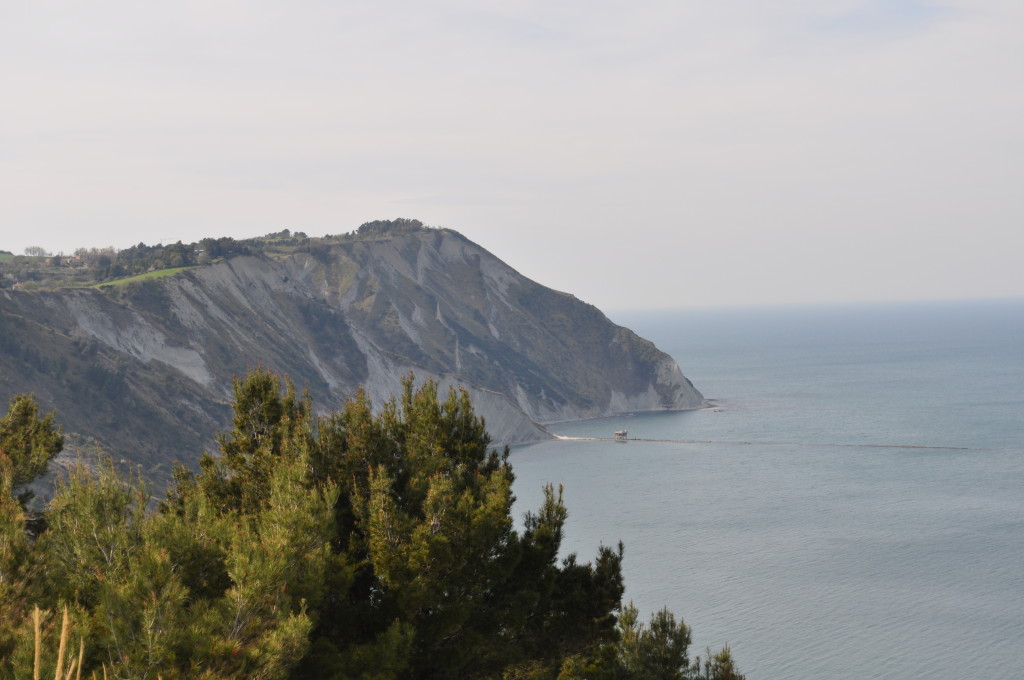 Wild mussels are very rare and mosciolo is even more precious because of its natural and social background. The harvesting area starts from the “Trave”, a single one-km-long rock (here above in the photo), and it reaches the “Scogli delle Due Sorelle”, in Sirolo, an area where the quality of water and the generous feeding contribute to have tasty and nutrient mussels, rich in Omega3.

They are harvested from May to October, using a specific tool with hooks.
The taste changes in the different months according to the variation of seaweeds. Lucky will be the travellers of July and August, that can try the best moscioli, or people coming in this area the third weekend of June, when there’s Mosciolando, a nice festival to celebrate these mussels.

As every Slow Food Presidium, moscioli are strongly connected to the territory and its history. I consider them to be like a mascot of this magic area. 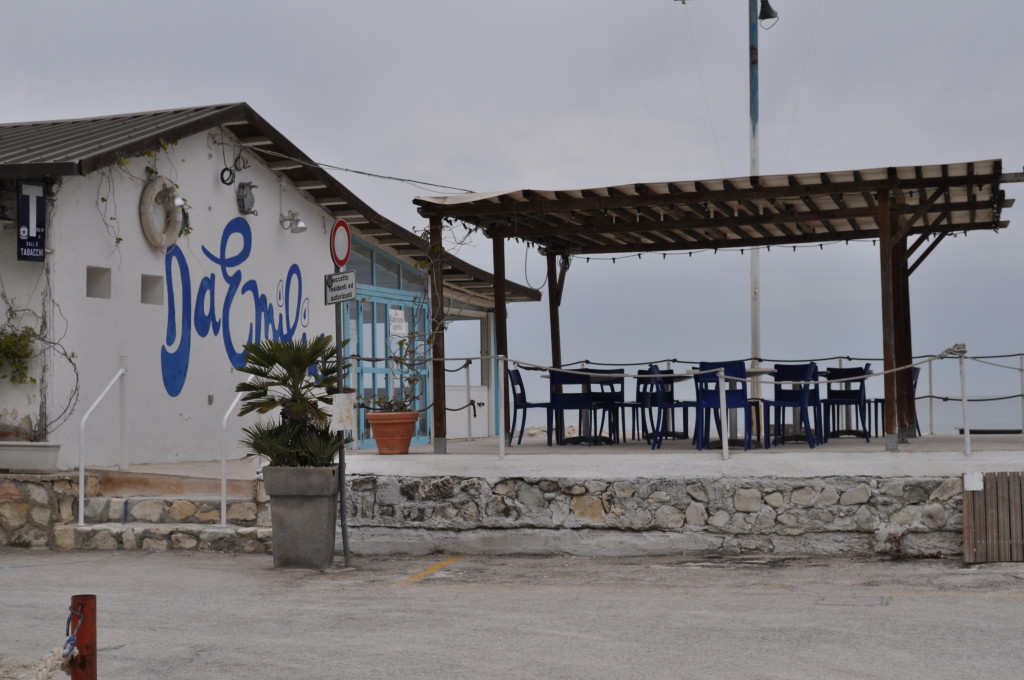 As I learnt from the book “La costruzione sociale del mosciolo” (written by M. Giovagnoli), the Portonovo Bay was completely wild and desert at the beginning of the last century and the first restaurants come only recently, in the last fifty years. Pioneer was “Emilia”, that come here to propose her food before the World War when it was still difficult to reach the beach by land. Her main customers were “the rich men of Ancora” that arrived with their boats.

At the beginning she had a farm style cooking, but following the suggestions of the tourists, she started to cook seafood, above all the local wild mussels. Since then the moscioli never left the menus of the restaurants in Portonovo, and they really contributed to the culinary identity of this bay.

Becoming a Slow Food Presidium, it has been acknowledged nationwide as an high quality mussel and it reached some restaurants in Milan and Rome. The main distribution continues to be local, also because of the reduction of quantities. In the sixties-seventies there were 80 boats that harvested about 200 quintals, while now there are just 4 boats for 20-25 quintals. An impressive decrease, also caused by the low interest of young people in this job, which is not paid enough and it calls for many diving hours. 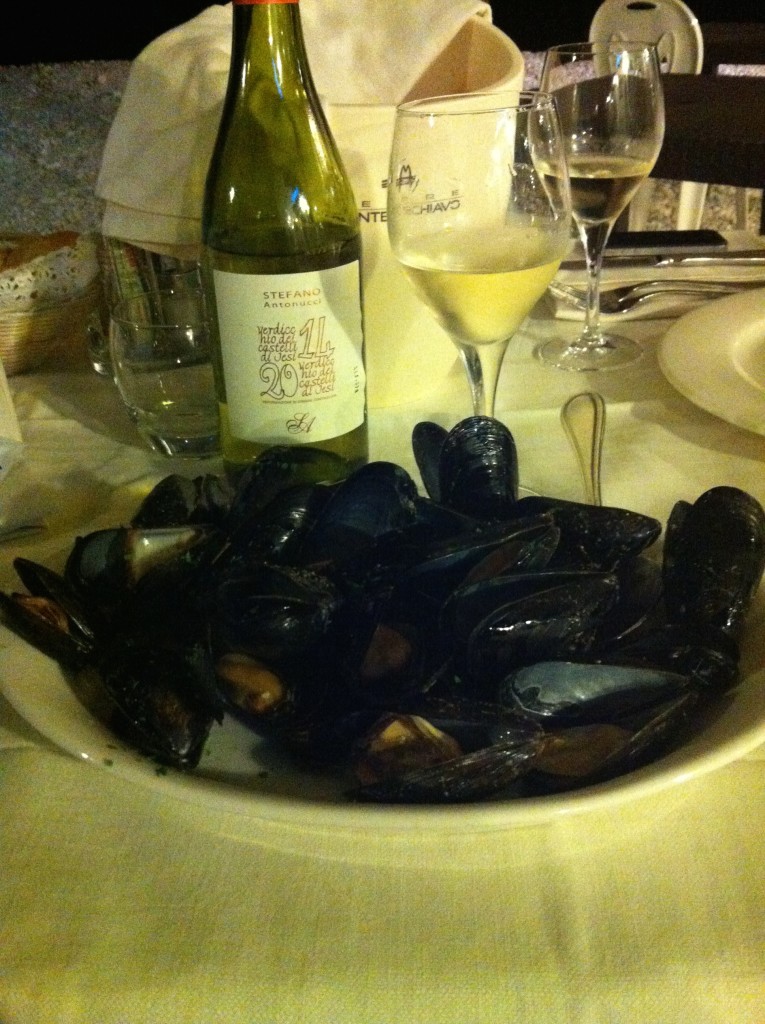 This place completely conquered me with its wild beauty and the kindness of its people, like Sandro and Fabrizio, the owner of the restaurant “Il Molo”, whom we convinced to set the table outside, not resisting the temptation to eat with les pieds dans l’eau in that lukewarm evening of April. That was absolutely one of the best dinner in our trip; alone on the beach in that little eden, eating simply cooked mussels (not moscioli, since they were not in season yet) and drinking chilled Verdicchio di Jesi – a typical white wine of this region. “Le Marche” clearly showed me that Happiness is really in the small things. 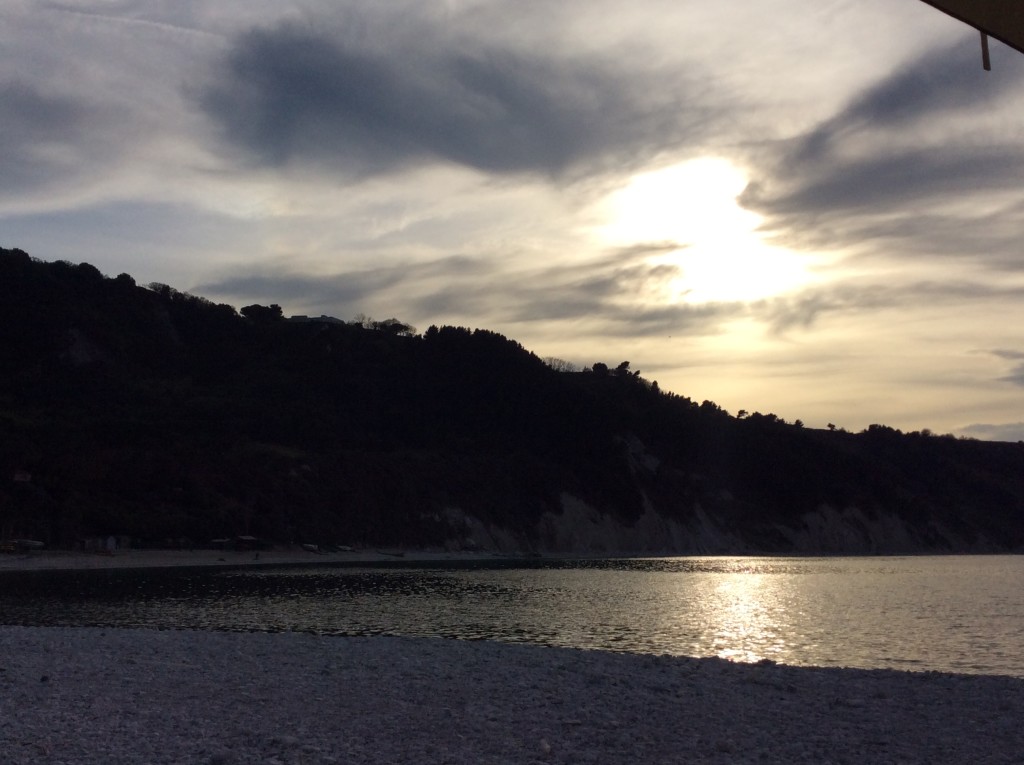