Last weekend, the 3rd and 4th of December, I attended the 8th edition of Prim’Olio Primo Vino, the event organised by Cantine Angeli and Consorzio di Promozione Turistica della Versilia, to promote the quality of local produces, as ExtraVirgin olive oil, wine and honey.

In this post I wrote about which features a good Extra Virgin olive oil should have. Here I’m introducing eight local businesses, I met during this festival, who produce high-quality evoo, and in some cases also wine, honey and organic vegetables. 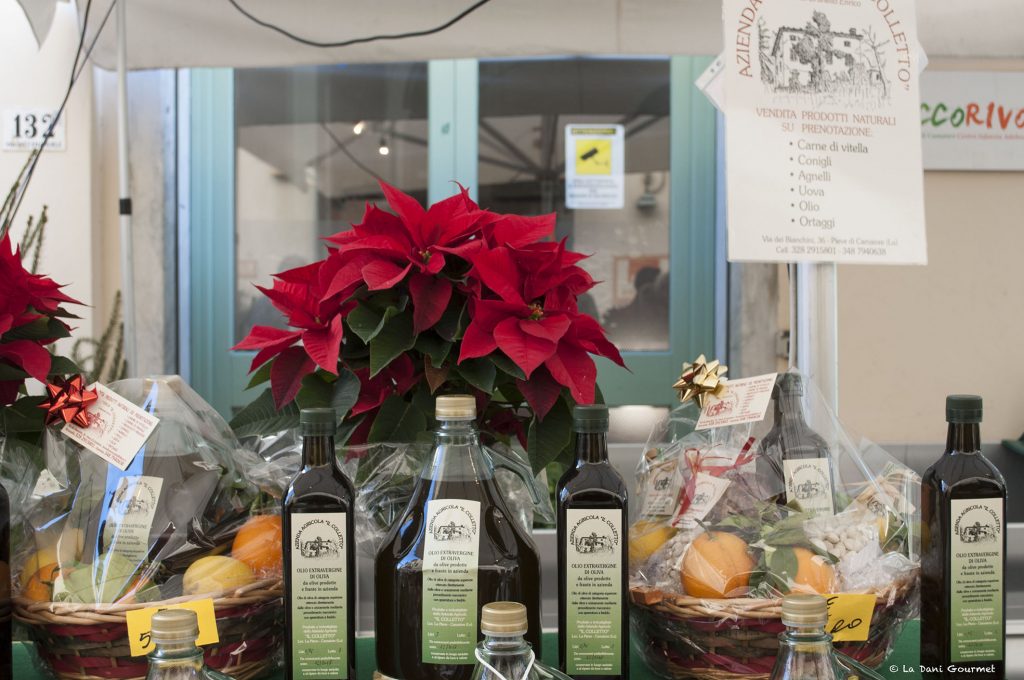 On the hill of Pieve di Camaiore, Brunello and Daniela produce a quality Extra Virgin oil, made from their Frantoio, Leccino and Moraiolo olives. The oil is cold extracted in their own olive-press, just a few hours after the olive harvesting. This year they’ve managed to produce 2.000 liters of evoo, since their olives have not been attacked by the olive fly.

Where to buy their ExtraVirgin? Directly at their farm in Pieve di Camaiore, where you can also buy fresh eggs, vegetables and some meat, such as lamb, veal, rabbit, they personally raise. 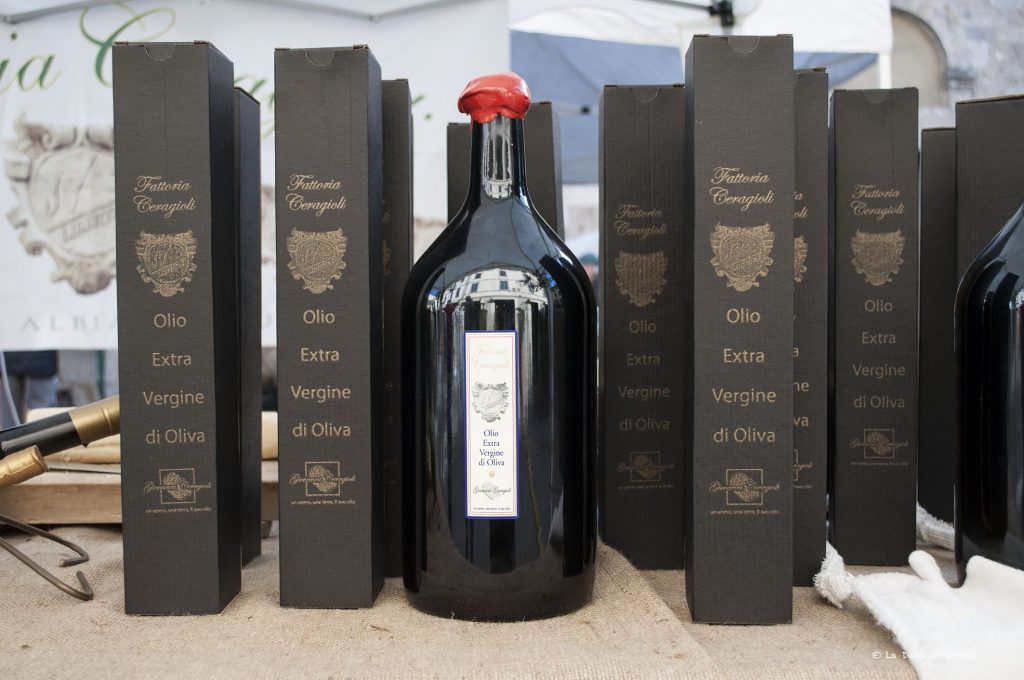 The company counts about 1200 of untreated olive trees of Frantoio, Maurino and Moraiolo cultivar, naturally fertilised by their own farm animals.
The olive groves are protected by Montemagno, and thanks to their position olives have not been attacked by the fearsome olive fly. Their Extra Virgin oil is cold extracted, at the latest 12 hours after harvesting, in the olive press of Frantoio Lenzi Fulvio in Gragnano (LU).

Where to buy their Extra Virgin? Directly at the farm, where they also organise tastings of their products. You can also find their evoo in some shops in this area (here a list). 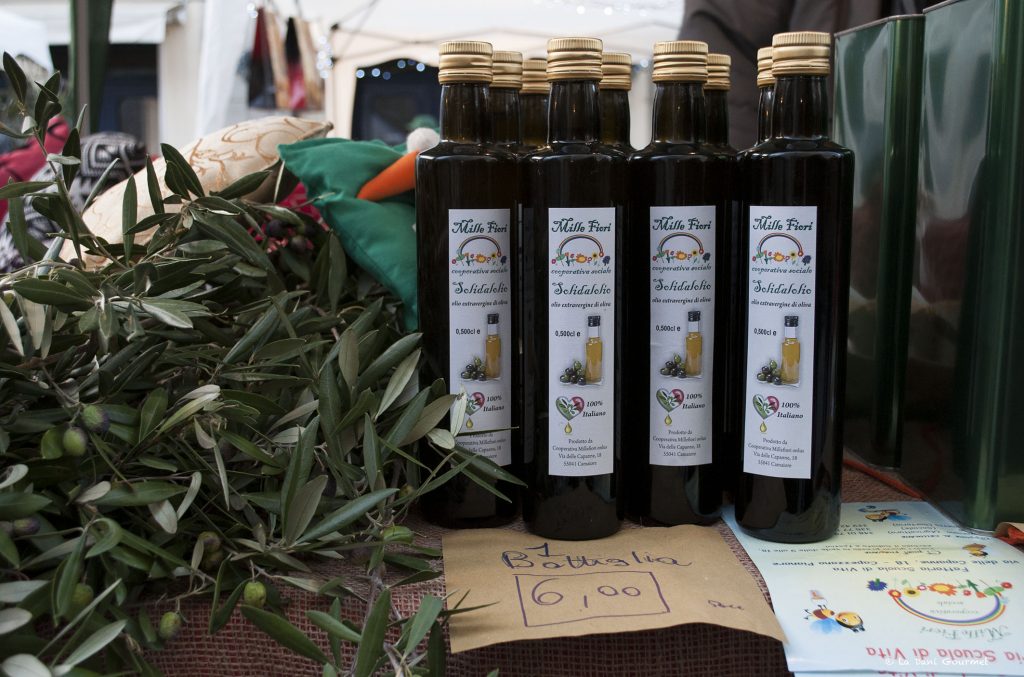 Local reality born in 2012, as a project of social agriculture, where nowadays twelve people with disabilities work.
The farm is located in an area called “Le Capanne”, near Camaiore, but the olive groves are spread around Versilia (Querceta, Monteggiori, Val di Castello). Their ExtraVirgin oil is cold extracted, in the olive press of Frantoio di Massarosa.

Where to buy their Extra Virgin? Directly at their farm. They are open Monday-Friday, from 9 to 6 pm, and there you can also buy vegetables, honey and polenta flour. 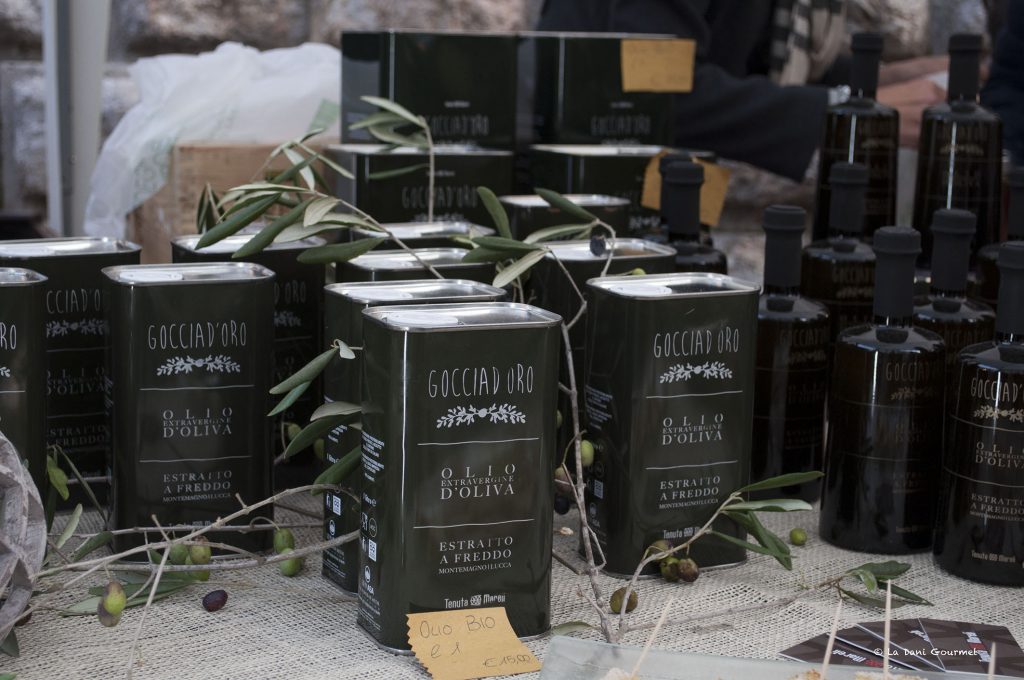 Via per Frascalino, Montemagno- Camaiore (LU)

Recently born biodynamic farm, which is also an Agriturismo, on the hill of Montemagno.
Tenuta Mareli started in 2010 from scratch, and they produce high quality Extra Virgin olive oil, following the principles of biodynamic agriculture. Together with other twelve companies, they are part of “Lucca Biodinamica”, a net of producers in the area of Lucca who share the philosophy of this kind of agriculture, where the earth fertilization and the moon cycles are fundamental.
Their Extra Virgin is made of 80% of Frantoio cultivar, it is cold extracted in the olive press of Frantoio di Massarosa. They recently got the permission to make their own olive press; therefore they will be able soon to personally follow the entire process of evoo.
They also produce organic honey, and biodynamic wine.

Where to buy their Extra Virgin? It is available in some shops of Camaiore, such as Cantine Angeli. Eventually, you can also buy it at their agriturismo, where they organise products tastings. 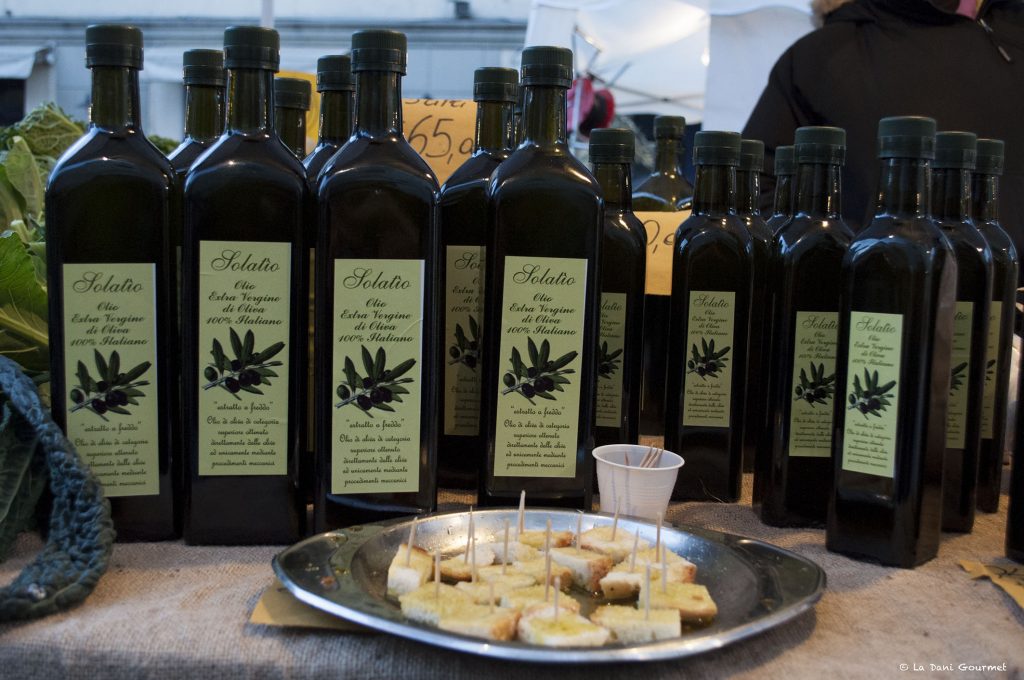 Farm located in Seravezza, on the hills behind Forte dei Marmi. Here Azienda Agricola Solatìo owns different olive groves, to produce their evoo. This year it’s only available a monocultivar of Quercetano, a varietal which is resistant to the attack of the olive fly. The other cultivars, Leccino, Moraiolo and Frantoio, couldn’t be used since strongly damaged by this insect.
Their olives are cold extracted at Frantoio di Massarosa, within one or two days from the harvesting.

Where to buy their Extra Virgin? At their shop in Ripa di Seravezza, where you can also buy other farm produces, such as vegetables, chestnut flour, wine, and an amazing polenta flour of Marano corn, I tasted last year. 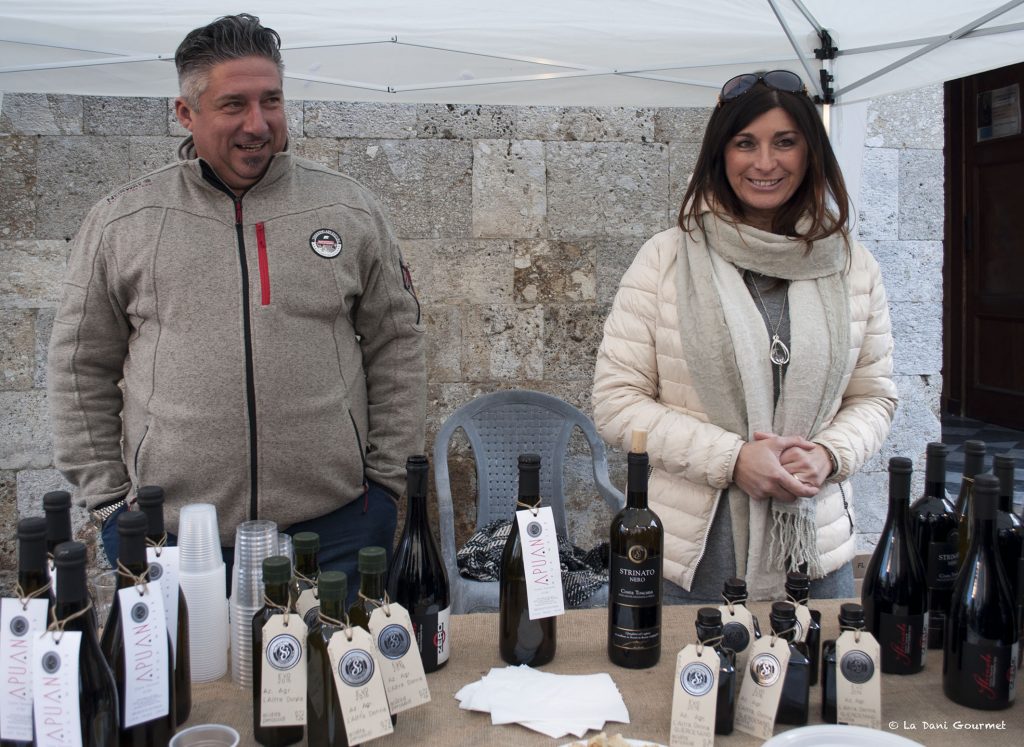 They won the prize as best Extra Virgin olive oil producer during this edition of Prim’olio Primo Vino. Their evoos – a monocutivar of Quercetano coming from century-old groves, and a blend of Leccino, Moraiolo and Quercetano – are cold extracted, and pressed within the day after harvesting at the olive press of Frantoio Lucchi e Guastalli, in Santo Stefano di Magra.
Their olive oil production is so limited, it’s only possible to taste the oil at their agriturismo.

L’Altra Donna’s core business is natural wine, without solphites. The wine production is around 10-15.000 bottles of three types of white wine and one type of red. To be noted, their sparkling wine made with the Ancestrale Methode, and Strinato Zero solfiti, a Vermentino with three days of maceration, and without any sulphites.

Where to buy their Extra Virgin? Their olive oil production is so limited, it’s only possible to taste their evoo at their Agriturismo. There, you can also buy their wines, which can be found in some restaurants, such as da Lorenzo in Forte dei Marmi, Enoteca Marcucci in Pietrasanta, and Alan in Camaiore. 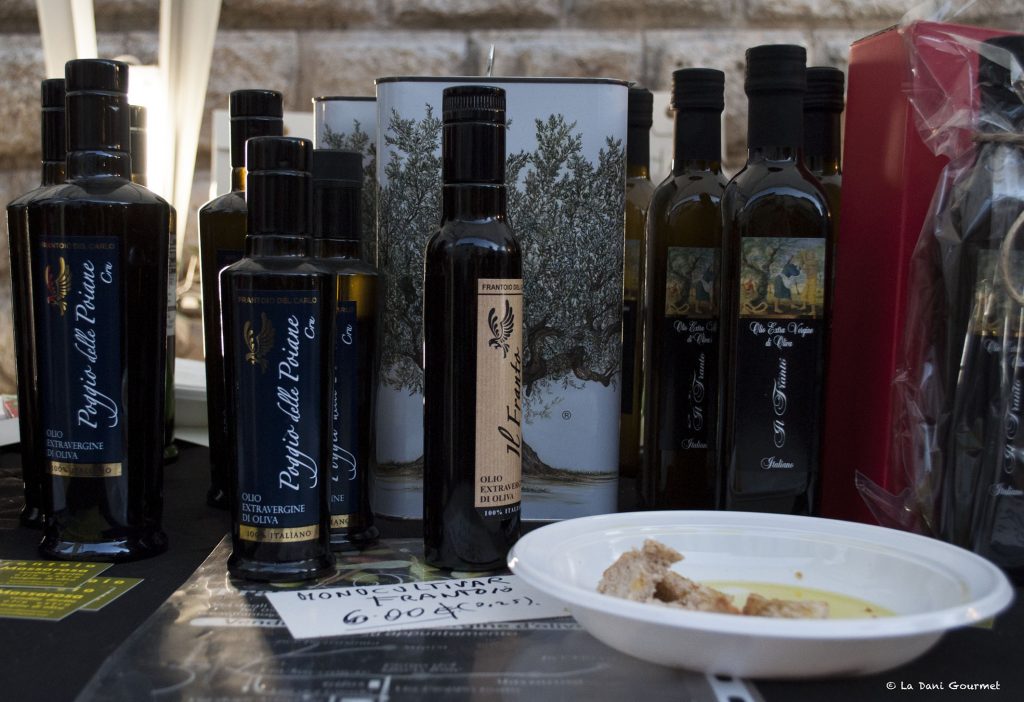 This is the reference olive press in Versilia, where many local olive producers go to produce their evoos.
They produce and sell three types of Extra Virgin oils: a blend of local Leccino and Frantoio; “il Poggio delle Poiane”, a cru coming from the hill of Pieve a Elici; and “il Franto”, a monocultivar of Frantoio.

Where to buy their Extra Virgin? Directly at their company location. 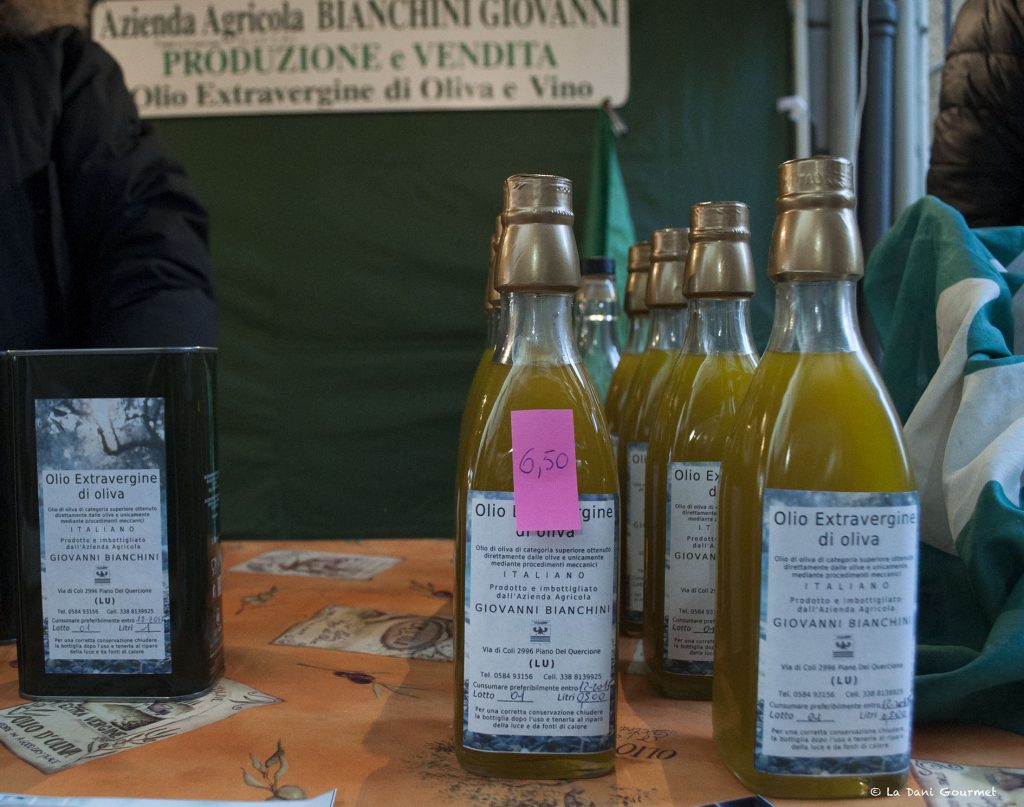 This evoo producer features century-old olive trees, placed in the hillside area of Pieve a Elici, near Massarosa.
The Extra Virgin olive oil is cold extracted with their olive stone press.

Where to buy their Extra Virgin? Directly at their grove, or in two shops: at the bakery Il Forno in Piano di Conca, or at the cheese shop Bagnoli inViareggio.